Electronic cigarette (e-cigarette) or vaping is increasing worldwide. Their use is highly controversial from a scientific, political, financial, and psychological perspective. Louise Johnson examines these controversies.

Tobacco smoking is a global pandemic affecting an estimated 1,2 billion people which poses a substantial health burden and cost. With nearly six million tobacco-related deaths annually, smoking is the single most important cause of avoidable premature death in the world7.

The research is clear on traditional cigarettes. Smoking can have a major impact on your diabetes risk. The Centre for Disease Control and Prevention (CDC) reported that tobacco smokers are 30-40% more likely to develop Type 2 diabetes. In addition, people with diabetes who smoke have an increased risk of complications.

Epidemiologic studies strongly support the assertion that cigarette smoking in both men and women increases the incidence of heart attacks, fatal coronary heart disease, and death. Even low tar and smokeless tobacco have been shown to increase the risk of cardiovascular events in comparison to non-smokers5.

Passive smoking with a smoke exposure about one-hundredth that of active cigarette smoking is associated with approximately 30% increase in risk of coronary artery disease compared with an 80% increase in active smokers4.

Differences between smoking and vaping (e-cigarette)

The e-cigarette contains nicotine; propylene glycol (found in food and some medication used as a carry vehicle); glycerine, and food flavouring. 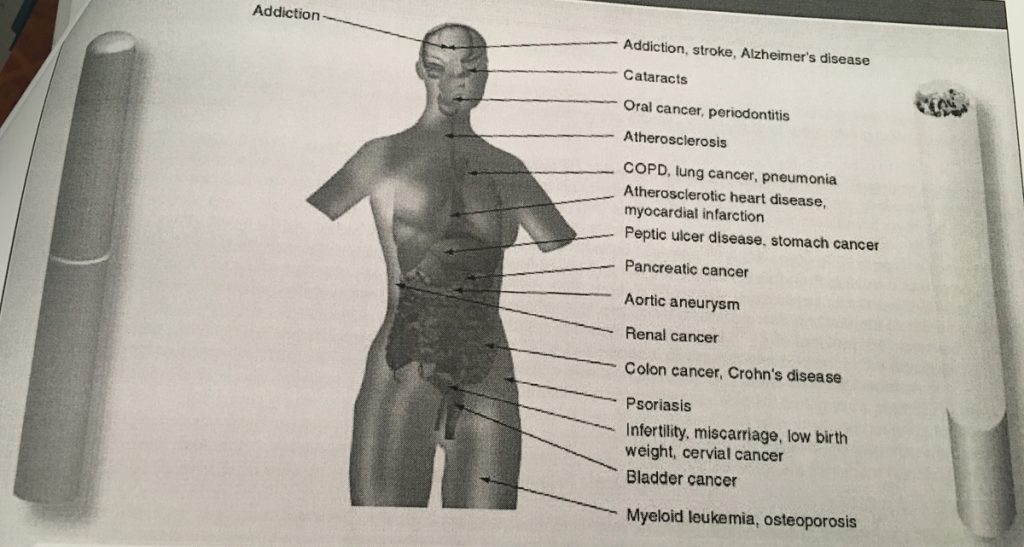 What are the effects of nicotine?

Nicotine stimulates specific receptors in the brain that produce both euphoria and a sedative effect. Individuals who have emotional dysfunction or attention deficits are more likely to start smoking and less likely to quit.

Nicotine is a sympathomimetic drug that releases catecholamine (adrenaline and noradrenaline). This causes a rise in blood pressure, heart rate and an increase in cardiac contractility. It also increases heart vessel constriction and can cause transient ischemia.

It has a negative effect on the endothelial (inner lining) of the blood vessels. Increased cardiovascular effects have not been a problem when using nicotine alone and nicotine per se does not cause cancer1.

A suspected adverse effect on reproductive system causes foetal neuroteratogenesis (abnormal babies should the mother smoke or vape during pregnancy).

Though, nicotine has the beneficial effect of increasing attention, concentration, and lifting the mood. Some of these properties cause the addictiveness of nicotine3.

E-cigarette: What about the clinical evidence?

In a pilot study, it was shown for the first time that the smoking habits of smokers changed after using the e-cigarette. This study used 40 smokers that did not want to quit. The results showed significant reduction in smoking and abstinence without withdrawal symptoms.

The overall quit rate was 22%. Moreover, a 50% reduction in smoking was observed. The end results showed an overall 88% decline in the number of cigarettes smoked per day.

The only negative aspect was the initial difficulty in working the e-cigarette. It took considerable training for known smokers to manage the e-cigarette effectively to be satisfied with the results of vaping6.

This study is of significant interest since none of the participants were interested in quitting. This fact needs some more explanation.

Some of the possible answers to this question may be the following options. The e-cigarette replaces the ritual of smoking gestures, the opportunity to reduce a bad smell, to reduce the cost of smoking, and the perception of general well-being might have been responsible for their switching and quitting.

What does vaping do to blood glucose?

The nicotine in vaping can cause a raise in blood glucose due to the effect of increased insulin resistance. Diabetics using insulin may need more insulin to control blood glucose effectively and Type 2 diabetics on tablet medication may need an increase in dosage to prevent the raise in HbA1c (average three-month glucose test).

Dr Louise Johnson is a specialist physician passionate about diabetes and endocrinology. She enjoys helping people with diabetes live a full life with optimal quality. She is based in Pretoria in private practice.