Just as they say, ‘your eyes are the mirror of the soul’, so too are your toenails mirrors of your health – revealing information about nutritional status, general health and even an undiagnosed systemic disease.

The primary cause may be from trauma – either from an object dropped onto the toenail or from constant bumping inside a shoe, as suffered by runners and athletes. This discolouration is due to micro-bleeding under the nail, and will grow out with the nail over a period of months (it can take eight to 10 months for the big toenail to grow out completely). If severe bleeding occurs under the nail, the nail may detach while a new nail grows out, provided there is no damage to the nail matrix or the nail bed.

In some instances, in women who have dark skins, it may be perfectly normal for aging to bring about brown or black streaks in the toenails. These are due to changes in melanin (the natural pigment that causes skin and nail darkening).

Changes in consistency, curvature, surface texture, growth and even colour can be signs of a systemic process. For example, blue half-moons or lunulae on your toenails can indicate Wilson’s disease of the liver or silver salts deposition in argyria. In rare instances, discolouration can indicate the presence of a benign glomus tumour beneath the nail, or, even more rarely, malignant melanoma.

Poor circulation in the feet affects blood supply to the nail matrix and nail bed. It is thought that the stop-start nature of poor circulation (intermittent hyperaemia) triggers the cell replication that can result in thickened toenails. Poor circulation can be present in cardiac conditions as well as in people who have high or low blood pressure, diabetes mellitus, or visible broken and/or varicose veins. 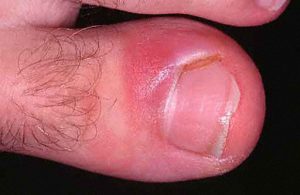