As we celebrate the centenary of insulin therapy, Dr Angela Murphy reflects on what a change it has made in the management of diabetes. It’s a life-saving medication.

A telegram to Dr Robert Lawrence: “I’ve got insulin – it works – come back quick.”

In May 1923, Dr Robert Lawrence was in Florence, Italy, far from his family home in Scotland, preparing to die from Type 1 diabetes.  A telegram from his colleague urged him to return to London and on 31 May 1923, Lawrence received his first injection of insulin. His life was saved! Lawrence went on to become a leading diabetologist and help found the British Diabetes Association. He lived almost 50 productive years thanks to insulin.

Yet today, insulin is frequently not seen as life-saving but rather as a harbinger of the end of the road. People with Type 1 diabetes require insulin injections from diagnosis as they lose the ability to secrete insulin from the beta-cells in the pancreas.

In Type 2 diabetes, insulin deficiency only develops after several years.  A healthy lifestyle, as well as oral medications, is prescribed to bring glucose levels under control. It’s important to remember that diabetes is, by nature, a progressive disease.

Initial treatments aim to improve insulin sensitivity and improve endogenous insulin secretion. At some point, the insulin secreting cells of the pancreas struggle to keep up with demands and start to shut down. When glucose control can’t be achieved with the body’s own insulin then it’s time to start insulin injections.

Incredibly, sometimes this seems to trigger a partial recovery of some beta-cells. It turns out that they had not died, merely gone on strike as the work became too hard. When reinforcements arrive in the form of an insulin injection, they decide to return to work. This is the reason people with diabetes often manage with just one injection daily, in combination with their tablets, for many years.

How does insulin work?

Insulin is needed to open the glucose channel into the cell so that glucose from the blood can enter the cell. If there is not enough insulin, or the cell resists the action of the insulin, blood glucose levels will rise. 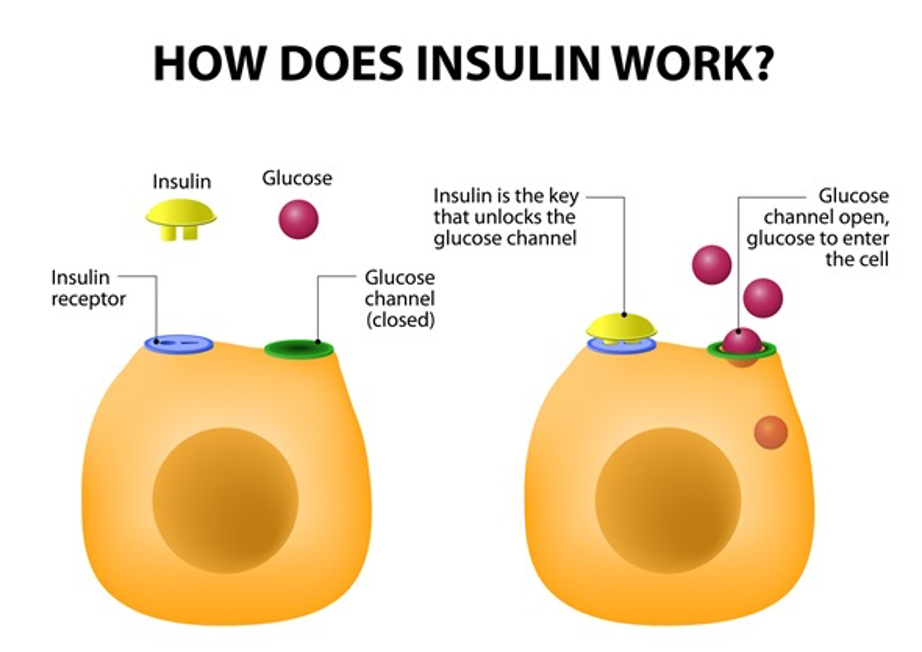 In the 1920s, insulin was derived from animals and only lasted in the body for several hours. In the 1950s, modifications were made to allow the insulin to be absorbed more slowly into the body. Over the next decades more advances where made with the introduction of human insulin, insulin analogues, improved delivery devices (pens and pumps) and non-injectable insulin (not available in SA). However, the precept of the purpose of insulin has not changed: it functions to move glucose from the blood into the cells where glucose is used to produce energy.

Patients often ask me how the morning blood glucose can be high when they have not eaten for 10 hours. Glucose enters the body directly from food and from stored glucose in the liver and muscle, particularly the liver. In the fasting state, such as being asleep overnight, the liver not only releases stored glucose but also manufactures glucose. One of the earliest features of insulin resistance occurs when the production of glucose in the liver is not kept in check, resulting in a rise in fasting glucose. At this point people with diabetes may be advised to start a night-time insulin. 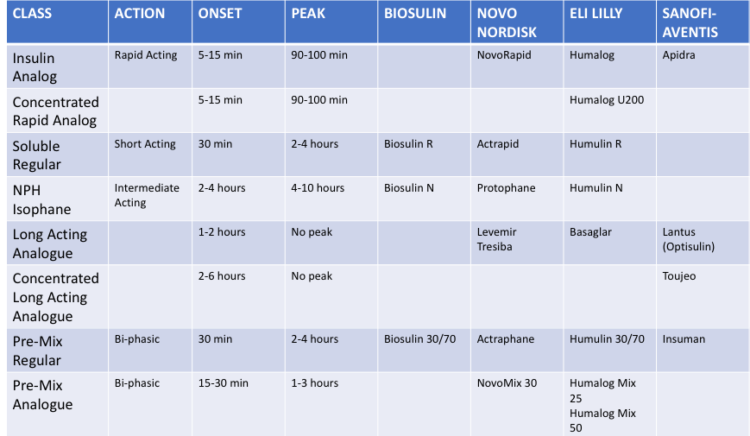 With such a plethora of insulins on the market, it’s no wonder insulin use can seem overwhelming and confusing. To better understand how the different insulins are used, I will explain the various insulin regimens that people with diabetes may be started on.

Most people with diabetes who are initiated on insulin will start with one daily injection, usually at bedtime. The efficacy of this insulin is determined by the fasting blood glucose reading: i.e. the blood glucose measured on waking in the morning before eating or drinking. If this fasting blood glucose is not at the target range (see Table 2 for your target range as per our South African guidelines), then the evening insulin is adjusted accordingly. The important points about bedtime insulin dose adjustment are:

Thus, adjustments are not made up and down daily. Rather they are based on the trend of the averages. Sometimes, the HCP may suggest using the basal insulin twice daily if they feel it would benefit daytime control. The titration of the morning dose will then be determined by the evening glucose reading, as explained below in the Pre-Mix Insulins.

When good glucose control can’t be maintained throughout the day with tablets alone, then insulin must be given to allow glucose absorption from meals. Pre-mix insulin consists of a mixture of short and intermediate insulin in the same pen. Some important points to remember:

I ask my patients to keep a diary and send it in every week so that I can help with these dose adjustments until we have reached the target glucose levels. 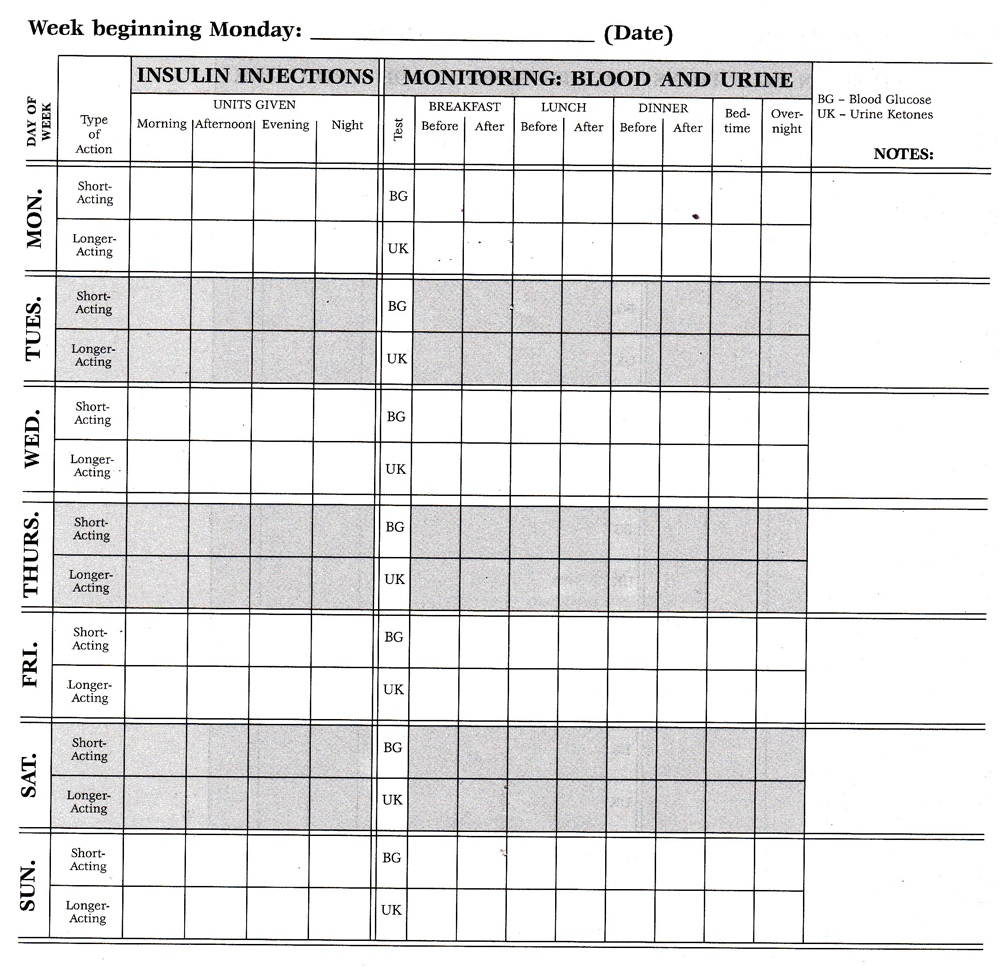 Basal insulins as described above.

This regimen aims to mimic the normal function of the pancreas: intermediate or long-acting insulin provides the background insulin needed and then short-acting insulin is given before each meal (but not with snacks).

This short-acting insulin can be adjusted at every injection according to the pre-meal glucose reading and food being eaten. People with diabetes on this regimen are often taught carbohydrate counting. This is a method of quantifying how much carbohydrate is in a meal.

The HCP works out a ratio of insulin dose per carbohydrate portion and this is calculated at each meal. In addition, high glucose readings need to be corrected, so people with diabetes are taught a correction formula to bring the blood glucose back to an average of 6mmol/l (see calculation below). This sounds much more complicated than it is.

With some practice, people with diabetes can use this skilfully. It’s mainly used in Type 1 diabetes but is appropriate for anyone using a basal bolus regimen.

CALCULATION OF A BOLUS INSULIN DOSE

The carbohydrate insulin ratio and sensitivity factor will be provided by the healthcare provider.

At my practice, we would not expect patients with diabetes to adjust their own insulins in those first weeks. They are asked to send readings in regularly, weekly to begin. We often revert to recording the readings the old-fashioned way with a diabetic diary as seen above and the patient can email or text that to me or the diabetic nurse educator (DNE). Some patients are using newer glucometers with Apps that can be uploaded and sent in.

Overall diabetes control is assessed with an HbA1c measurement every three to six months. HbA1c is a complex of glucose attached to haemoglobin in the red blood cell. This allows us to see what the average glucose is over the previous three months and gives a more comprehensive idea of control compared to the glucometer.

If the HbA1c and glucometer readings don’t correlate, then we must look at where in the day the blood glucose is increasing. To do this, patients will be asked to do 360’ testing or seven-point profile testing. For three days, they must test before and two hours after each meal as well as before going to bed (seven readings). This can help decide the next step in insulin management.

Getting the best response from insulin therapy

Up to this point, emphasis has been made on the choice of insulin and finding the correct dose. However, it’s important to remember the following when aiming to get the best response from insulin therapy: 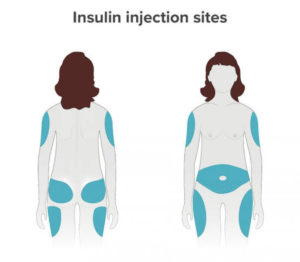 If your healthcare provider suggests it’s time to start insulin, do not see this as a negative in your diabetes journey but as a tool to continue in good health in your life journey.

Dr Angela Murphy is a specialist physician working in the field of Diabetes and Endocrinology in Boksburg. She is part of the Netcare Sunward Park Bariatric Centre of Excellence and has a busy diabetes practice.