Glucose, also known as blood sugar, is the preferred source of energy by the body cells. It’s transported from the liver or intestines to the cells of the body through the bloodstream. The body has a system that regulates the glucose level so that it doesn’t rise too high or drop too low, as this has detrimental health complications.

The regulation of glucose is done through an intricate system, involving various hormones insulin, amylin, incretins and glucagon.

When glucose levels are higher than normal (hyperglycaemia), the hormone, insulin, is released from the pancreas and this allows the glucose circulating in the blood to be taken up by the body cells and also to be used to create fat cells. This restores the blood glucose to a normal level (euglycaemia).

When the glucose levels are lower than normal (hypoglycaemia), the hormone, glucagon, is released and then the glycogen in the liver is broken down and converted into glucose, restoring euglycaemia. 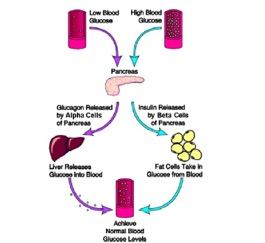 Insulin is a hormone secreted by the beta cells of the pancreas. It’s carefully regulated in response to circulating blood glucose levels. It allows body cells to access glucose for energy and it’s also involved in the creation and storage of fat.

While glucose is the most potent stimulus of insulin release, there are other factors that also stimulate the creation and release of insulin, like certain amino acids, such as arginine, leucine, lysine, and glucagon-like peptide 1 (GLP-1) after a meal, to name a few.

So, how does it regulate blood glucose? When your glucose levels are increased, insulin is released. The insulin allows glucose entry into the muscles and liver, converting glucose to glycogen for storage and the remainder of the glucose is converted into fat cells. Hence, glucose is removed from the blood, restoring the glucose level to normal. 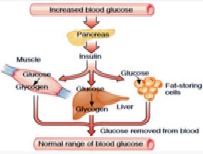 In Type 1 diabetes, the secretion of amylin is also deficient. Amylin also helps to slow down gastric emptying, the process by which the contents of the stomach are moved or emptied into the small intestine, and therefore slowing the rate of absorption of nutrients by the small intestine.

These are hormones made by the digestive tract and includes GLP-1. They increase the amount of insulin released by the pancreas after eating, even before blood glucose levels become elevated. They also slow down the rate of absorption of glucose in the blood by reducing the rate of gastric emptying/digestion and may directly reduce food intake. Incretins also inhibit the release of glucagon from the alpha cells of the pancreas.

Glucagon is a hormone released by the alpha cells of the pancreas. It’s released in different circumstances: when the blood glucose level is low (hypoglycaemia), or when there are increases in adrenaline and epinephrine when you feel threatened or your body is under stress (fight or flight mode), and due to other factors.

When glucagon is released, the liver converts glycogen (sugar previously assimilated and stored) into glucose, thus raising the blood glucose level and restoring a balance. 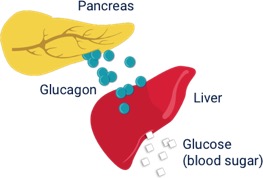 Work with a multi-disciplinary team

The body is so intricate and complex. Each organ, hormone and substance play such a crucial role in maintaining balance. Glucose control is reached through the harmonious work of the different elements. When one element is off balance, it has an effect on the balance of the overall system, as seen in diabetes. Therefore, it’s best to work with a multi-disciplinary team to ensure you have the necessary tools to create balance in your body.

Bongiwe Nkondo is a registered dietitian and has worked in both public and private practise. She is currently the vice chair and CPD portfolio holder of the ADSA Gauteng South Branch Committee. Her areas of interest are optimum nutrition, nutrition throughout the life cycle and non-communicable diseases. She is passionate about empowering people to make better health choices.
Go to the AtoZ of Healthy Eating