Diabetes management is all about targets. It is of cardinal importance to know what these targets are and to work diligently to reach them. The outcome of your diabetes and diabetes-related complications are balanced finely on these values.

The targets in a diabetic patient’s life are:

The aim in the overweight patient is to lose 5-10% of their body weight as this has shown to reduce cardiovascular risk factors.

Data showed that 15% of weight loss has been proven to even reverse Type 2 diabetes8. The remission of diabetes was associated with the Very Low Carb Diet (VLCD), which consists of less than 800 calories/day. This should be prescribed and monitored by a healthcare team.

A cholesterol test has three important components that should all be in the target range.

The best method to measure an accurate value is to get an upper arm electronic blood pressure measure. Sit down in a quiet room and do three measures, five minutes between each measurement and take the lowest value. This was proven to be as effective as a 24-hour ambulatory blood pressure measurement (test where one wears a portable blood pressure monitor for 24 hours). The three intermittent measures compare well with risk of complications as seen in the Systolic Blood Pressure Intervention Trial (SPRINT) trial2.

Hypertension (high blood pressure) is the most common non-communicable disease (NCD) in the world, with a prevalence of 40%. It is also the number one cause of mortality in the world4. Worldwide it is poorly treated, and 70% of all people do not reach the target. In this evaluation, the target for blood pressure was 140/90mmHg.

Why the big drive to get to blood pressure targets?

If you have uncontrolled blood pressure (not on target) in your 40s and 50s, the risk of dementia increases three-fold in your 60s and 70s.

The smallest amount of blood pressure reduction can make a difference. It was proven that a decrease of systolic blood pressure of 2mmHg decreases the risk of cardiovascular events by 7-10%. The risk for ischemic heart disease decreased by 7% and the risk for stroke mortality reduce by 10%7.

This is the most targeted and talked about value in diabetes treatment. This is the average three-month glucose value that can predict the possible development of both microvascular and macrovascular complications. It is important to remember that it is an average and not a hard value.

HbA1c is the measurement of how the red blood cells and glucose stick together in the previous 120 days. The lifespan of a red blood cell is only 120 days. It will also show if there is red cell loss (anaemia or bleeding) as this will affect HbA1c.

To get a calculated value of your estimated average glucose from your HbA1c value, this tool can be used – https://www.diabetes.co.uk/hba1c-to-blood-sugar-level-converter.html The shortened table inserted can also be of use. 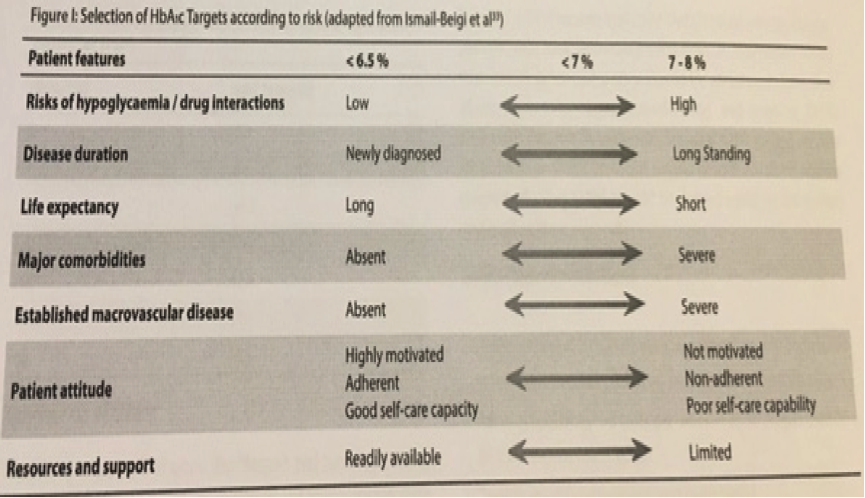 To get a better impact of your diabetes control a continuous glucose monitoring (CGM) is of much more value, since the measurement shows the fluctuations of both high and low glucose values effectively.

How often should I test my blood glucose?

The target value for HbA1c is 7% but this should be as low as 6% in pregnancy, and can increase slightly to 7,1 to 8.5% in the elderly, chronic kidney impairment, limited life expectancy and patients that are staying alone and are hypoglycaemic unaware. This needs to be discussed with your healthcare provider15.

The HbA1c as a target is important to predict microvascular complications. By the time the HbA1c exceeds 7,5%, the risk of microvascular disease (diabetic eye problems, diabetic kidney impairment and feet problems, such as burning feet) is increased by 2,5 to five-fold6.

In Type 2 diabetes, there is also a strong risk factor (two to four-fold increased risk for macrovascular complications (development of cardiovascular disease – heart attack and heart failure). This risk can already be present in the pre-diabetic phase in Type 2 diabetes5.

It is very good news to know from trial data that intensive glucose control can reduce microvascular disease even in older individuals with long-standing diabetes.

The ‘legacy effect’ should be remembered in managing diabetes. This is where, the body remembers the early days of treatment, where there was good control, even when, later, the glucose control deteriorates9.

Severe hypoglycaemia is a strong risk factor for cardiovascular mortality in patients that are:

Smoking increases the risk of atherosclerosis and can deteriorate and advance the onset of macrovascular complications (heart attack and stroke) in diabetes. It should be stopped and not substituted for the e-cigarette since this is not proven safe.

People with Type 2 diabetes should be advised to perform at least 150 minutes of exercising per week. This should be of aerobic nature i.e. walking, cycling, swimming and should aim to increase the heart rate by 50-70% of the maximal heartbeat.

In conclusion, it is of importance to remember that there are many drugs both old and new that can help with achieving most of these goals. Speak to your healthcare professional and acquire the correct combination of drugs for your diabetes. You are the leader of this diabetes team and are the most important player in securing long-term success.