Cara Verster, a Grade 6 learner, is thrilled that the Denim for Diabetes Day she organised at her school, Leeuwenhof Akademie, was such a success.

On 14th October, Leeuwenhof Akademie scholars swopped their school uniform for denims. They raised R3858 and donated the proceeds to Diabetes South Africa.

Cara Verster, a young diabetic, decided in the beginning of the year she wanted to get her school involved with the DSA Denim for Diabetes initiative. Leeuwenhof Akademie has been super supportive during Cara’s six years at the school.

The teachers and headmaster are always willing to help and very understanding when it comes to Cara’s diabetes management. Cara’s parents have peace of mind every single day sending Cara to school.

There isn’t a school activity or sport that Cara doesn’t try at school. She is an avid public speaker at the school, she is in the theatre group, she runs long distance, plays hockey and the drums. She is in the Top 10 academically and always full of beans. If you ask anybody at the school they will tell you Cara has never let diabetes stop her in any way. She always finds the strength to persevere and endure in spite of overwhelming circumstances.

Cara is looking forward to the Grade 7 trip to Cape Town next year.

Hannes Labuschagne, a young boy with Type 1 diabetes, held a Denim for Diabetes Day at his primary school, Laerskool Mariepskop (Hoedspruit, Limpopo) in November. He raised R1500 for Diabetes South Africa from the proceeds of the day. His success was published in the local newspaper. 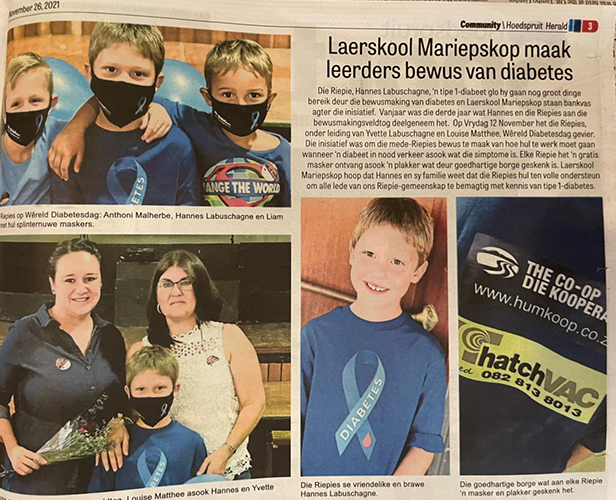