Single mother, Francinah Monyamane, shares her motivation for managing her daughter’s Type 1 diabetes with the utmost dedication: unconditional love and her own supportive mother.

Francinah Monyamane (28) and her daughter Tshimologo (3) live in Lawley, Lenasia in Gauteng. They stay with Francinah’s parents Grace (57) and Arnold. Tshimologo has Type 1 diabetes.

Even though Francinah knew the father of her child had Type 1 diabetes and that there was a chance her child could have it as well, it was far from a concern in her mind. It was only when Tshimologo was 1 year and nine months old that reality revealed itself.

The crèche, that Tshimologo attended, informed Francinah that the toddler was not active anymore, frequently sleepy, continually thirsty, and urinating more than usual. Francinah asked her mother, Grace – who looked after Tshimologo after she returned from crèche every day – to take her to the Lawley Clinic to check her glucose levels. The grandmother was told that it was not diabetes as a child could not get diabetes; antibiotics were prescribed.

The symptoms persisted and with the added aggravation of ringworm, Francinah requested her mom to take Tshimologo back to the clinic and insist on a urine test. Once again, the toddler was sent back with only ointment for ringworm.

Another week past and the toddler was not showing any signs of improvement; it was Gogo Grace who insisted they take her to Lenasia South Clinic. The doctor said they shouldn’t worry, it was only tonsillitis. “As I was walking out the consulting room, I thought I can’t leave here with my daughter like this. I knew something was wrong and insisted on a urine test,” Francinah says.

After much frustration and lack of assistance from the nurse, the urine test was done by Francinah. “I saw the dipstick – her glucose levels were high and she had ketones. I showed it to the doctor and said, ‘You see she does have diabetes!’” The doctor was stunned. All the necessary tests were completed; the toddler was put on a drip and rushed to Chris Hani Baragwanath Hospital.

Currently, Tshimologo only takes Protaphane twice a day, and goes for check-ups every three months. Her doctor is very impressed with her management, and she hasn’t had to be admitted to hospital again.

A mother’s and grandmother’s love

What motivates this mother to keep her daughter’s glucose levels under control? “I want to keep her alive. I want to see her grow up, go to school, matriculate, go to university. I want to see her getting married. I can’t lose my baby,” Francinah explains. “With my mother’s assistance, the stress is alleviated. We have gotten used to the routine. The only time we stress, is when she has a low; we always carry food with us.”

The young mother adds, “Honestly, I wouldn’t be able to cope without my mother. While I am working, my mom cares for her. And, by witnessing what a supportive mother I have, I want to set the same example to Tshimologo, and hopefully by me being an example of a good daughter, Tshimologo will see that and be one as well.”

Gogo Grace’s explains her reasoning for helping her granddaughter, “Francinah is my only daughter, whatever she goes through, I go through as well. I need to help her and my granddaughter.” And the love is definitely mutual as Tshimologo only sleeps with Gogo Grace.

The plan for self-care

Francinah and Gogo Grace are already trying to get Tshimologo to understand her condition. If you ask the little girl what food she eats, she replies ‘special food’ and if you ask what food she doesn’t eat, she answers ‘chips’. During, the interview she even asked her mother to buy ‘diabetic food’ for her at Southgate Shopping Centre.

At first, the toddler was fearful of the insulin pen but has gotten used to it now. When her glucose levels are being checked, she will ask, “Mommy, is it up or down?” and if Francinah says “Up”, Tshimologo says, “Aaahhh, now I have to drink water”, and if the response is “Down”, the baby girl will jump up and down, clapping her hands, saying “I’m getting food. Yay!”

Ideally, the single mother and Gogo would like Tshimologo to be injecting herself by the age of 10. 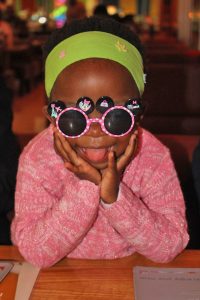 Message to other mothers with diabetic children

“There are a lot of children with diabetes. When we go for Tshimologo’s check-ups, I see numerous children being admitted due to poorly-managed control. I urge other mothers to take care of their children, good control is attainable. Diabetes is treatable. Even if you don’t have a lot of money – all you must do is make your child eat more vegetables and less starch. Constant monitoring is essential, and ensure that their child understands at an early age,” Francinah says.

2pm: Gogo Grace fetches her from crèche. Once at home, her glucose levels are checked.