Anette Thompson explains the use of probiotics in diabetic foot ulcer treatment.

Diabetic foot wound care practitioners understand that the three pillars of foot ulcer healing consist of: tight blood glucose control; offloading of pressure on the wound; and optimum care of the wound itself (ensuring good blood supply to assist the wound healing process).

Good blood supply delivers nutrition to the wound, although the word nutrition in diabetes has other dietetic connotations. In the past decade, emerging research into the specifics of the wound bed environment has brought further understanding of such entities: wound biofilm; proteases (protein destroying enzymes); colonisation by microorganisms and antibiotic resistance.

Biofilms are dynamic heterogeneous communities that are continuously changing3. They may consist of a single bacterial or fungal species, or may be polymicrobial, i.e. contain multiple diverse species9.

In a wound, you can imagine the biofilm as a densely-packed colony of bacteria embedded in a thick, slimy barrier of sugars (polysaccharides) and proteins. The biofilm barrier protects the harmful microorganisms beneath from external threats.

Most people will have heard of probiotics (a substance which stimulates the growth of microorganisms, especially those with beneficial properties) as a supportive treatment to gastrointestinal disorders. The human gut is naturally populated with millions of beneficial bacteria which in healthy individuals exist in balanced colonies, collectively called our gut microbiome.

Antibiotics destroy both beneficial and harmful bacteria, hence one should administer probiotics with a course of antibiotics (but not to be taken at the same time of the day). An imbalanced microbiome or dysbiosis is related to both gastrointestinal problems, such as diarrhoea and inflammatory bowel disease but also, outside the gut, such as obesity, allergy and skin disorders 12.

Most early studies in the literature regarding skin outcomes were those in which probiotics were taken orally. Newer studies are investigating topical application but there are limitations due to a lack of regulatory consensus in different parts of the world.

They produced a culture of the probiotic and applied it to the wounds of 14 diabetic patients and 20 non-diabetic patients. Wound debridement (clearing of dead tissue), granulation tissue formation (healthy new tissue containing new blood supply) and total healing after 30 days were found in 43% of diabetics and in 50% non-diabetics.

When the researchers looked at cells from the wounds after 10 days, they found that there was a decrease in the percentage of diseased and necrotic (dead) cells and an enhancement of interleukin-8 production.

Interleukin-8 (IL-8), now renamed CXCL8, is an important mediator of the immune reaction in one’s immune system response. It has two main functions:

There are hundreds of different probiotic strains. Even within the genus lactobacillus, there are more than 150 different species, such as L plantarum, L acidophilus, L reuteri and L rhamnosus to name a few.

Many of these are found in fermented food items, such as yoghurt, kefir, kimchi, sauerkraut and salt-pickled vegetables. Within each species, there are further hundreds of strains which are numbered, such as Lp299v.

Probiotics can strengthen the immune system, reduce inflammation and promote wound healing through an array of mechanisms, such as the production of inhibitory substances like acids or bacteriocins; excretion of natural antibiotics; blockage of pathogen adhesion; nutrient competition and antioxidant activity8. Painstaking research is required to pinpoint the exact effect of each strain on the body before any claims can be made.

In 2016, continuing research, at the national university in Tucuman, Argentina,1 designed two pharmaceutical dosage forms by using lactobacillus plantarum culture supernatants (clear liquid left above the solids after spinning in a centrifuge to concentrate the cells). These formulations have been cleared for use in clinical trials on chronic wounds that lack good blood supply (ischemic wounds).

Animal studies have been used to investigate the efficacy of probiotics, such as L brevis, L fermentum, L plantarum and L reuteri, as treatment for skin wounds. A meta-analysis of animal studies performed, in early 2017,10 found that probiotics administration is an effective pharmacological treatment of cutaneous animal wounds but further research is required.

Late last year, a study at Babol University of Medical Sciences in Iran, tested the benefits of probiotic administration in patients with diabetic foot ulcers5. Patients with a diabetic foot ulcer who received probiotic supplementation for 12 weeks experienced faster wound healing coupled with an improved glycaemic and lipid profile compared with patients who had been assigned a placebo, according to findings from a randomised double-blind, placebo-controlled trial.

Probiotic supplementation also influenced lipid profile and inflammatory markers when compared with placebo. The researchers noted that information was not collected on faecal bacteria loads before and after probiotic administration, or on the characterisation of the microbiome at baseline, during and after therapy and bacterial cultures were not taken (a shortcoming of the study).

Most recently, Dr David Armstrong reports, from the USA, that researchers are showing faster wound healing following the administration of lactic acid bacteria into wounds.

He refers to a study by Vågesjö et al., published online in the Proceedings of the National Academy of Sciences of the United States of America, that used a mice model to show wound healing.

Researchers transformed lactobacilli with a plasmid encoding chemokine 12 (CXCL12), noting that this enhanced wound closure via proliferation of dermal cells and macrophages. It also resulted in more transforming growth factor-beta (TGF-β) expression in macrophages. The study notes that bacteria-produced lactic acid reduced the local pH, which inhibited the peptidase CD26 and facilitated a higher availability of bioactive CXCL12.

The authors also note that lactobacilli delivering CXCL12 improved wound closure in mice with hyperglycaemia or peripheral ischemia, conditions associated with chronic wounds. The study adds that the treatment showed macrophage proliferation on human skin in an in vitro model of wound epithelialisation.

This is exciting news—although admittedly in early days—that we can use a probiotic (lactobacillus species) that is already a part of our beneficial bacterial microbiome2 and enable it to produce, in this case, CXCL12, which may have positive wound healing attributes.

The increasing global incidence of diabetes brings with it an increase in diabetes complications. Those affecting the feet are probably the most feared. These complications, such as foot ulcers, are very serious, extremely costly and can be devastating if they end in amputation.

The complications of diabetes, such as foot ulcers, can be prevented or delayed when people with diabetes play an active role in their own care and education about their condition. Education helps in the early recognition of complications and the ability to act appropriately.

When nerves are damaged, it is known as peripheral neuropathy. There is a reduced feeling, or feeling may be absent altogether.

When feeling is reduced or absent, a person with diabetes may injure his or her foot without being aware of the injury until it presents with: an infection, moisture oozing from the foot, odour or swelling. Sometimes family members become aware of these symptoms and then investigate. 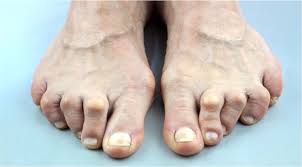 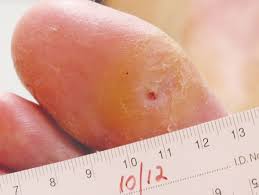 Neuropathy alters the speed of blood flow in the foot and wasting of the muscles. It leads to weakness of the foot and changes the shape of the toes and leads to abnormally high pressures on the foot.

Good blood supply to the feet keep the tissues and muscles strong and healthy. If the supply is inadequate, the foot becomes more susceptible to injury and healing is also prolonged.

Most foot ulcers are caused by poor footwear. Foot ulcers develop where pressure is the highest. Hard skin or callus is a sign of pressure and walking on callus increases the pressure on the hard skin – like walking on a stone. The neuropathic foot won’t feel the pressure or the pain.

The importance of feet self-examination cannot be overemphasised. This is best done daily, and if abnormalities are observed, action must be taken.

Healthcare professionals can assist the diabetic patient by doing feet inspection and education at the same time. If one foot has an injury or ulcer, inspection of the healthy foot is also important.

How to spot foot ulcers

A foot ulcer may present as a dark spot that resembles a splinter under the skin. Once the hard skin is removed, the ulcer is exposed.

Foot ulcers may look like small holes surrounded by a halo of pale skin. When the hole is examined, a larger ulcer is found that was hidden under the skin. This is known as undermining.

Undermining can be compared to a table that has a solid surface on the top, with a large open space underneath.

Examination and treatment of these lesions are best done by trained healthcare professionals. No bathroom surgery.

Once diabetic foot ulcers have been diagnosed, a wound nurse who specialises in advanced wound management can assist with wound care and the correct selection of treatment.

The choice of dressing must promote wound healing and be appropriate for a diabetic foot. It must treat infection, absorb exudate (moisture oozing from a wound), protect the surrounding skin, may have to treat devitalised or dead tissue, and must be soft enough to not add pressure to the area.

Other modalities that can be used to enhance wound healing:

Blood sugar control is essential to assist wound healing. The body’s ability to fight infection is reduced in a high sugar environment because the white blood cells become ‘lethargic’ and slow to fight invading microorganisms. If an infection is suspected, it is best to consult a doctor for antibiotics as soon as possible.

The best approach to help heal diabetic foot ulcers is to have a multi-disciplinary team. The wound nurse will treat the foot ulcers while the vascular surgeon will assess and treat the blood supply. The vascular surgeon/general surgeon will clean the wound by removing dead tissue so that viable tissue is exposed and healing can be quicker. The podiatrist will look at and treat any abnormal shape of the foot or problems with the gait. An orthotist can prescribe or make footwear for the diabetic foot. And, the diabetologist and the diabetes nurse educator manages blood sugar control.

Diabetic foot ulcers can be prevented, but the time to act is now. Once diabetes has been diagnosed, it is best to have an assessment done by the various diabetes professionals in the team to establish a baseline to work from. Having a baseline means including the person with diabetes because various goals can be set to work towards. Such a goal may be to normalise blood sugar levels to encourage healing and to prevent more complications.