Nadine Lang says living with Type 1 diabetes for 74 years has not been problematic. She reflects back to the time she was diagnosed and tells her tale.

Nadine Lang (79) – a widow – lives in Summerstrand, Port Elizabeth and has two daughters and a granddaughter. She moved to South Africa from Britain in 1964.

I was diagnosed one week before my 6th birthday. The onset was very quick; I was constantly drinking, tripping off to the toilet and bed wetting. I landed up in the local children’s hospital and a few days later, all the children, except me, were enjoying my birthday cake. Naturally, my parents were in shock but quickly recovered with the wonderful help and encouragement they received from the hospital staff.

It was only 22 years after the discovery of insulin and there was little choice: only the long-acting Protamine Zinc and short-acting insulin, I think called Soluble. Because I was so young, it was thought better (and kinder) to only have one injection a day, so I was put on Protamine Zinc.

After I left hospital, I used to go every fortnight as an outpatient. The Protamine Zinc-alone regimen proved ineffective, so it was complemented with Soluble. Eventually, the Protamine Zinc was discontinued and thereafter I was only on Soluble twice a day.

I had to wait 20 minutes to half an hour in those days after having my injection before I could eat. This was to allow the insulin to start to work before the food had chance to raise my sugar level. As I became more stable and my mother more confident in coping, my outpatient visits occurred less frequently. They became monthly, then every six weeks and finally every six months, unless a problem cropped up.

I continued to use Soluble twice a day with occasional adjustments of dosage as I grew up until the mid 80s. In fact, I must have been almost the last person to use Soluble as I refused to change until it ceased to be manufactured. I considered myself quite stable on it and had no wish to bother to change.

From the mid 80s, I still had two injections a day for a long while with my doctors trying different alternatives and dosages. Eventually, around the turn of the century, I changed to Levemir twice a day and NovoRapid three times a day, until recently when my diabetes began to give problems. My sugar readings have always yo-yoed but were getting out of hand. Currently, my doctor and I are trying Ryzodeg twice a day and NovoRapid at lunchtime. 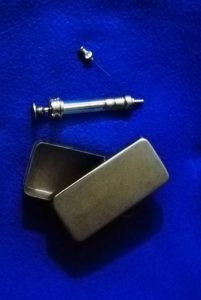 Initially, injections were a hassle. How much easier it is today! Back then, there were no pumps, pens or even disposable syringes. Only glass syringes, which had to be sterilised by boiling in water and/or be kept in spirits. Needles were longer and thicker by today’s standards. Mine were often re-sharpened when they got blunt as we were too poor to buy new ones.

Another problem was testing sugar levels. We had no blood testing with a glucometer. It was urine testing with a test tube, a spirit lamp and Fehling’s or Benedict’s solution. Once mixed together and heated, the results merely showed whether there was no sugar (no colour change); green (a little or 1+); yellow (more or 2+); or red (far too much or 3+).

Later, it was easier by dropping a pill in the test tube which contained a sample of my urine. Then it became a paper strip which just had to be held in the urine flow. Urine testing was never very accurate but we managed.

If one was feeling hypoglycaemic (having a low), it was useless to test to ‘prove’ one was indeed having a low as the urine could be ‘stale’. Comparing those urine test readings with today’s blood tests with glucometer readings, one realises just how inaccurate they were.

I must admit, because testing was such a hassle, from my early teens I never tested unless I was going to the doctor or if I was pregnant. I relied on how I felt. This was until glucometers and the new insulins arrived.

Weighing what you eat

Because testing results were so limited, diets were rigid. Everything had to be weighed. It was 1944, in wartime Britain with food rationing which persisted for several years afterwards. Though, diabetes patients were allowed extra meat, cheese and butter in place of sugar and sweets.

There was little choice and apart from diabetic apricot jam, which came in a jar not unlike the old small anchovette jars. There were no alternatives for many years, such as tins of ‘lite’ or sugar-free versions of fruit, custard, biscuits, soup, sweets and cool drinks, etc.

When I went to kiddies parties, I was not allowed any sweet things the other children had. Instead my mother would make me blue jelly made with gelatine and colouring. When I was about nine, I was lucky to get a new paediatrician. He explained as he had four children himself, he knew all too well that children broke rules, and it was better to break the rules of rigid dieting and times of eating and learn how to avoid problems that could ensue. Which I did.

His reasoning has stood me in good stead and I have enjoyed everything that life has offered me. My diabetes has not prevented me from doing anything. At school I was treated like everyone else. Only once, in primary school, was it a problem when teachers were hesitant to take responsibility for me on a day trip out of town. Thankfully, my mother came so I enjoyed the outing.

In the early days, there was no such speciality as a diabetologist. You either saw a GP or specialist physician. I was under the care of a diabetologist for several years.

Over the years, I have seen several other medical experts, such as podiatrists and dietitians, etc. There is always something new to be learned. For instance, I find it fascinating that there always seems to be a newer insulin on the market, which is ‘better’ than the others. I must admit, I do not always follow the changes, particularly if I am stable. It is both wasteful and expensive if the new is ineffective, since insulin usually comes in batches of 5 pens. At times I was left with some I couldn’t use.

At 16, I stayed with my diabetic pen pal in Holland for five weeks. I also went on the first three overseas trips, organised by the British Diabetic Association; twice to Switzerland then to Austria. At varsity, I participated in several extramural activities, where I met my husband, Cyril – a South African. We both became dental surgeons and spent many years together in private practice. I have been fortunate to have travelled extensively, enjoyed a variety of hobbies, been involved in several community and charitable organisations and studied further.

Starting a family as a Type 1 diabetic

After finishing varisty, Cyril and I migrated to South Africa, finding I was pregnant with our first child. When I was pregnant, urine testing and Soluble insulin were still common practise. I would test meticulously and watched my diet, though I had given up weighing my food years before. There were no dietitians in town and I relied on past diets, experience and my specialist physician and gynaecologist. My daughters have not inherited diabetes, and as far as can ascertain, I am the only one of my many cousins who has it (I am an only child).

However, I am ashamed to admit that I failed to recognise the symptoms when my husband developed Type 2 in his seventies. Though he complained of a dry mouth, I was more concerned with his sudden and dramatic loss of weight. When we were given the diagnosis by the doctor, I burst out laughing both with the relief that it was not cancer and at my stupidity. My husband was on insulin for a couple of weeks, then moved to tablets for the rest of his life. He only retired at 83 when he had a successful quadruple bypass heart operation. He lived very well afterwards until his sudden death of natural causes, a month short of 88.

Can’t picture a life not as a Type 1 diabetic

I really cannot imagine my life without diabetes. Starting so young, I have little recollection of life before it arrived. My experiences, when things were more difficult, taught me to be more self-reliant; to be pro-active and not reactive; and not to take risks.

I am well aware of how infections and relatively minor illnesses can upset my diabetes control. Thus, I always seek medical advice sooner than later and have flu vaccinations and the like. But, with that said, I don’t worry about all the other diseases that diabetes may lead to because they can affect the normal population too.

Fear of an amputation

However, I am petrified of having an amputation. I only buy shoes that I have fitted properly in the shop. Though, I once bought a pair of shoes with had a label inside, just over the toes, which I could neither feel nor see. The next day, my big toes, on both feet, were septic. I sought a doctor immediately. I lost the toenails a couple of days later. The doctor and my podiatrist admitted how lucky I was not to have needed surgery which they had both anticipated.

Since the mid 80s, I have kept a record of my tests, insulin taken and food eaten. I find it useful when things go haywire to see why, by turning a few pages back to find similar circumstances and compare. Also, I am never without sweets, chocolate or biscuits within reach, in case of a low.

I read the labelling on foods in supermarkets these days and know the contents are listed in order from highest percentage to least. These labels weren’t always listed in the past. Also, one must be wary of ‘lite’ now that our government is promoting less consumption of sugar. Some cool drinks are ‘lite’ with no sugar, but others are ‘lite’ in the sense they that they contain less than the normal product but far more than a diabetic should have.

There is definitely an element of luck with my surviving so long. When you get to my age, you’ve lost many friends along the way. I’m lucky. My only handicap at the moment is that I am very hard of hearing and getting slower with age.