One of the five pillars of Islam

Fasting from dawn (the meal in the morning is called Suhoor) to dusk (Iftaar) during the Muslim month of Ramadan is one of the five pillars of Islam. The Quran specifically instructs all mature and healthy Muslims that: “Oh you who believe! Fasting is prescribed to you as it was prescribed to those before you so that you may attain self-restraint.”

Most Muslims start fasting from a very young age. Even though, it’s only obligatory when puberty is attained and it is a religious, social and community in most societies. The Islam religion follows the lunar calendar and Ramadan occurs 10 days earlier each successive year. This year (2019) it will be nearly the whole of May.

The sick are allowed to postpone the fast and may even be exempted from it, as stated in the Quran: “Whoever witnesses the month (of Ramadan) then he/she should fast. But, if any of you is ill or travelling – then he or she is exempted from fasting.”

Despite this concession many sick Muslims will fast despite learned religious scholars and medical professionals advising them not to. This applies equally to people living with diabetes and this article outlines some guidelines as to how to approach diabetics intending to fast.

It’s known that there are several potential beneﬁts of fasting during Ramadan. Feelings of compassion for the less fortunate and underprivileged are evoked in Muslims who fast. Though the hunger and thirst senses are heightened, the natural sense to eat or drink is controlled. This leads to a sense of having willpower and to be in control of the senses.

The long-term ideal is for Muslims to ultimately be able to resist daily unnecessary and potentially harmful forms of food as urged by the Quran to: “Eat of what is lawful and wholesome on the earth,’ and ‘And He (God) enforced the balance. That you exceed not the bounds; but observe the balance strictly and fall not short thereof.”

Fasting also offers a time to ‘cleanse’ the body and the soul. The person fasting is encouraged to develop a greater sense of humility, spirituality, and community involvement.

There are also indications of physiological beneﬁts of fasting. Some studies indicate that intermittent fasting limits energy intake. This promotes weight loss in obese individuals, which could be cardio-protective. Insulin sensitivity is also increased. 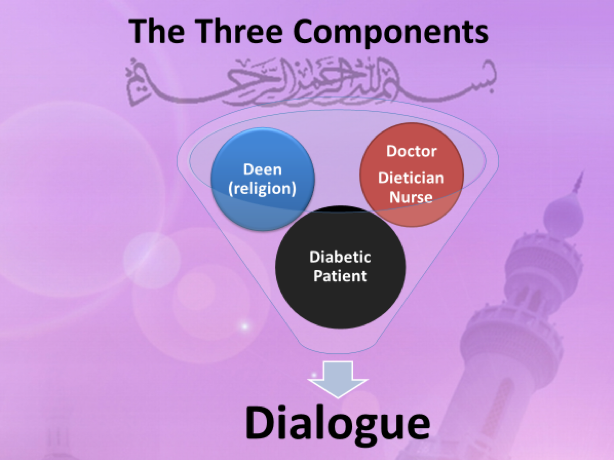 All Muslims living with diabetes should ideally have a pre-Ramadan consultation beforehand with their healthcare practitioner. Fasting and the management of lifestyle conditions go hand in hand and a holistic approach should be adopted.

Dietary intervention is essential and the inclusion of more fibre, complex carbohydrates, vegetables, legumes should be encouraged, as should sparing salt use.

There is increasing evidence that dates, a staple food type during Ramadan, may have beneficial effects on glucose and cholesterol levels during Ramadan and may lead to a decrease in cardiovascular risk factors. Dates, consumes in moderation, are rich in fibre and is high in fructose, which has a lower glycaemic index than sugar.

It’s known that not having breakfast, in the normal population, increases the possibility of being overweight by a factor of five, and increases the chance of developing diabetes. The consumption of the pre-dawn meal is hence paramount. Stopping smoking and optimising of medication and co-morbid conditions should be discussed as well.

Maintaining some form of exercise, such as the optional nightly Ramadan prayers (if possible and depending on level of fitness), is part of lifestyle maintenance. 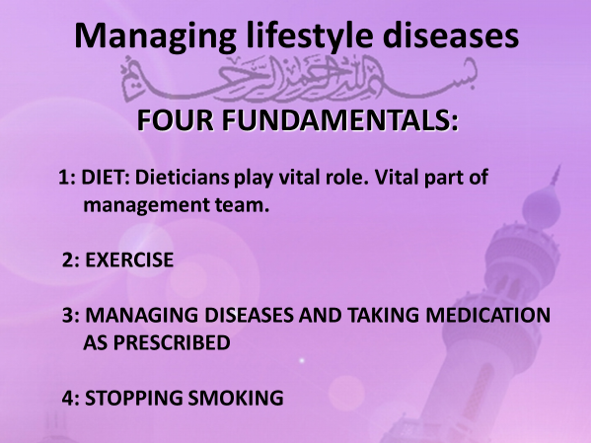 Hypoglycaemia is the concern of most doctors and patients when fasting is contemplated by the Muslim living with diabetes. Several patients, especially the elderly, are not always aware when their glucose levels drop. In one study, 24 out of 29 subjects were not aware that their glucose levels were low.

Different patients will have different signs and symptoms at different levels, with a glucose level below 4 mm/L being dangerous in most instances. Signs are often subtle, such as slight inattentiveness, and may not be easily be picked up by household members. The easy availability of glucometers is paramount in all circumstances and it should be emphasised that checking the levels (finger prick test) does NOT invalidate the fast. If levels are low, the fast should be broken immediately with the religious edict that life and health are MORE important than obligations emphasised.

Ramadan, contrary to its intention, is associated with caloric excess. An abundance of savouries, pastries and desserts is the norm and people living with diabetes consume as much as others. Hyperglycaemia can thus occur and at times is difficult to distinguish from hypoglycaemia, based on signs and symptoms alone.

Dehydration, especially if the diabetes is poorly controlled, is a possible complication of fasting during Ramadan. Polyuria (production of abnormally large volumes of dilute urine) and a reluctance to consume too much fluids at night (to avoid urinating) increases the possibility and the development of pre-renal failure, and thrombosis may have to be considered.

This include patients with one or more of the following:

Patients in this category MUST NOT FAST. If they insist on fasting, close monitoring and counselling is essential, with specific instructions given on when they MUST break their fast if necessary. They must be informed that they are putting their health and life at risk.

In this category are patients with one or more of:

Patients in this category SHOULD NOT FAST. If they insist on fasting they should also be closely monitored.

The following fall in this category:

These patients should be able to fast with sound advice being given first.

Each person living with diabetes will have unique circumstances and should be counselled individually. Explaining the risks and symptoms of hypoglycaemia and what appropriate actions to take must be emphasised.

Patients on medication need to be advised to change their dosages to accommodate the daytime fast. Some general guidelines are given below. But, again it must be emphasised that each Muslim who intends fasting must have advice tailored to their unique situation.

Metformin has a low-risk of causing hypoglycaemia and generally no dose adjustment is needed. Some authorities advise taking two thirds of the total daily dose with the evening meal, with one third taken with the morning meal. The once-a-day formulation should be taken at the usual dose in the evening.

The first-generation SUs had a high propensity of causing hypoglycaemia and should be avoided. The second-generation SUs are much safer. The general rule for stable patients living with diabetes is to take half the morning dose and the normal evening dose.

The other option is to switch evening and morning doses and reduce the morning dose. The once-a-day formulation should be taken in the evening, instead of the morning with a halving of the dose for the first few days. The dose can then be adjusted as needed.

These generally do not need dose adjustments. Once daily doses should preferably be taken in the evening.

Ramadan is an ideal time for people living with diabetes to implement lifestyle changes that would be in accordance with their religion and improve their health as well as their diabetes control.

Each patient must be consulted well before the commencement of Ramadan and their risks stratified according to their unique circumstances.

Access to glucometers is an important aspect of fasting, as well as knowing who should and should not fast, how and when to test for glucose abnormalities and when to break the fast. A collaborative approach between patients living with diabetes, religious scholars and medical professionals is the ideal approach to ensure the safety of those who want to fast, and to assure those who should not fast that their religion most certainly permits that.

Dr Salim Parker is a general practitioner in Elsies River. He is an Honorary Research Associate: Department of Medicine, University of Cape Town and Immediate Past President: South African Society of Travel Medicine (SASTM).