Sunette Swart tells about how bariatric surgery is a tool for treating obesity. Though, she highlights it’s not a shortcut to weight loss as the patient will still have to put in effort after surgery.

Obesity is defined as a chronic (long-term), progressive disease with episodes of remission (improvement in weight) often followed by relapse (regain of weight). It has multiple causes with behavioural, hormonal and neurological elements and can lead to almost 200 different health problems, including diabetes (high blood glucose) and hypertension (high blood pressure). It is a treatable condition, and it has been shown that even a 5% weight loss or more can reduce the risk of complications and improve overall health.

Bariatric surgery is derived from the Greek word “baros”, which means “weight.” The first weight-loss surgery was performed in 1953, and bariatric surgery has since evolved into what is now known as metabolic surgery.

To qualify for bariatric surgery, you must be between the ages of 18 and 65 years, with a body mass index (BMI) of 40kg/m2 or more or a BMI of 35 kg/m2 or more together with at least two co-morbid conditions (like diabetes, high blood pressure or high cholesterol).

Bariatric surgery can be done via a small, keyhole cut (laparoscopic) or with a larger cut, determined by the surgeon.

There are three types of bariatric surgery procedures:

The sleeve is performed when approximately 80% of the stomach is removed, leaving a small banana-shaped stomach that can hold around 50-150ml in volume. This results in smaller portions of food eaten and the hunger hormone, ghrelin, is reduced by removing a part of the stomach. Food then continues to pass through the small intestine in the same manner as before surgery, as shown in Figure 1. 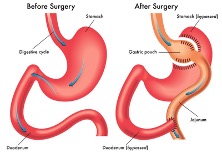 This procedure combines a sleeve gastrectomy with a much longer Y-shaped intestinal bypass than the RYGBP. The food bypasses about 75% of the small intestine, resulting in a decrease in energy and nutrients. As shown in figure 2, the bile and pancreatic digestive juices only mix with the food at the very end of the small intestine. The hormone changes caused by this procedure is far superior and causes a significant reduction in hunger, increases the feeling of fullness and results in excellent blood glucose control.  This is a highly complex surgery that can cause “dumping” (symptoms such as nausea, vomiting, abdominal cramping, diarrhoea, bloating, sweating, dizziness, and a fast heart rate), malnutrition, and loose stools. Protein intake and life-long vitamins are critical due to malabsorption (especially vitamins A and D). 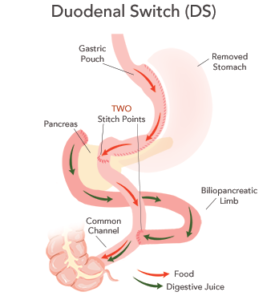 The SADI-S procedure is a newer variation of the duodenal switch that is easier to perform, takes less time in the operating room, and requires only one surgical bowel connection. The stomach is reduced in size by removing approximately 85% of it (same as the sleeve gastrectomy). The small intestine is then bypassed about 50% (longer than in the RYGBP).  This results in nutrient malabsorption due to the shorter path that digested food travels through the intestines, but with the benefit of added digestive enzymes, as illustrated in Figure 3. Bowel movements after this procedure are likely to be looser and more frequent.  Life-long vitamin supplementation is compulsory.

The Roux-en-Y gastric bypass is regarded as the gold standard in weight-loss surgery due to its effectiveness and durability.  The name is a French expression that means “in the shape of a Y.” The stomach is divided into a small egg-sized pouch, and the larger part is bypassed. The small intestine is then divided into two sections, and the new stomach pouch is linked to the bottom end of the small intestine, which allows food to pass through. The top portion of the small bowel (where stomach acids and digestive enzymes pass from the “old” stomach) is connected to the small intestine during the final stage of the procedure, forming the Y shape seen in Figure 4.

As a result, the Roux-en-Y gastric bypass combines restrictive and malabsorption procedures. The patient eats less, feels fuller faster, and as the food bypasses contact with the first part of the gastrointestinal tract, there is less absorption. Gastric acid reflux is treated during this procedure. Life-long vitamin supplementation is recommended.

Ghrelin, a hunger hormone produced in the stomach, stimulates the brain, increasing appetite and cravings for fatty foods. Because the stomach is smaller after bariatric surgery, less ghrelin is released, and patients’ appetites decrease. Leptin is another important hormone that regulates satiety, or the sensation of fullness. Following bariatric surgery, leptin levels rise, increasing fullness. Incretins are hormones secreted by the gut that regulate glucose levels via insulin release and affect appetite and gastric emptying. The most common of these incretin hormones, glucagon-like peptide 1 (GLP-1), is increased by bariatric surgery, resulting in improved blood glucose levels, decreased appetite, and slower gastric emptying. One of the reasons we see Type 2 diabetes remission after bariatric surgery is the improved GLP-1 effect on blood glucose.

Bariatric centres use a multi-disciplinary team approach, consisting of the surgeon, physician, registered dietitian, biokineticist and psychologist. There are several bariatric centres in the private healthcare sector in South Africa with varying accreditation with medical aids. At this time, a limited number of bariatric surgeries are performed in public hospitals, such as Helen Joseph Hospital in Johannesburg and Tygerberg Hospital in Cape Town.

Bariatric surgery is a tool for treating obesity. The success should be measured by weight loss and the improvement and/or resolution of co-morbid conditions, such as diabetes and hypertension. Continuous follow-up with your multi-disciplinary team is essential to ensure the long-term success of bariatric surgery with long-term lifestyle changes, for example,  healthy eating. Remember, no matter which procedure is chosen or performed, this is not a shortcut to weight loss. You as the patient will still have to put in the effort after surgery.

Sunette Swart is a registered dietitian with 16 years’ experience in bariatric surgery. Her focus is on diabetes and obesity. She is an active member of a research team and a participant in international clinical trials. Since 2006, she has been a multi-disciplinary team member at Netcare Sunward Park Bariatric Centre of Excellence. Since 2010, she has been involved at the Sunward Park CDE clinic as consulting dietitian, led by specialist physician Dr A Murphy and a member of The Centre for Diabetes and Endocrinology (CDE). www.sadietician.co.za