Jonathan Collins updates us on his victory of changing aviation legislation to create protocol for pilots with Type 1 diabetes to be assessed as medically fit to fly.

I was initially declared permanently medically unfit in 2020 to fly by the Aeromedical Committee (AMC) of the South African Civil Aviation Authority (SACAA) when I was diagnosed with diabetes. He then appealed the decision and was found only temporarily medically unfit for one year.

In October 2021, the one-year grounding elapsed and I re-applied for my Class 1 Medical Certificate. It took five months for the result of my re-application, but I was successful in being issued a medical waiver. During this time, I have been successful at changing aviation legislation to create a protocol for pilots with Type 1 diabetes to be assessed as medically fit to fly. This means that pilots who are suddenly diagnosed with Type 1 diabetes are able to be assessed as medically fit to fly by the Aero Medical Committee.

I was applying for a medical waiver based on international best practices found in Australia, Canada, the United Kingdom and the United States. These countries already had medical protocols in place which made provision for pilots with Type 1 diabetes to fly commercially. I also used their legislation to draft the technical standard for South Africa which has now been approved by the SACAA and is awaiting to be gazetted.

Australia and Canada predicate their medical assessments based on the applicant’s use of a continuous glucose monitoring (CGM) system. I use the Dexcom G6 and a Tandem T: slim X2 insulin pump. Both of these devices collect blood glucose data and several other metrics. The Dexcom G6 system has a magnificent platform called Clarity which beautifully displays the blood glucose data using metrics called Time-In-Range (TIR) and Co-efficient of Variation (CV), etc.

This data collection was critical to demonstrate the risk of incapacitation from hypoglycaemia, or hyperglycaemia was low and thus safe enough for commercial flight. Traditional methods of evaluating a patient’s diabetes management always include a measurement of an HbA1C. Interestingly, during a meeting with the SACAA, a paediatric endocrinologist indicated that the data collected reflecting a patient’s blood glucose TIR and CV demonstrates a much clearer picture of diabetes control instead of a single snapshot of the HbA1C.

I was fortunate enough to work with the experts at the Centre for Diabetes and Endocrinology (CDE) in Houghton, Johannesburg. A doctor recognised the importance of my needs. He conducted an incredibly thorough physical assessment and was instrumental in scribing a report that would indicate to the SACAA that I meet the medical fitness criteria described by overseas countries when looking at TIR, CV, HbA1C and many other pathology metrics.

During my re-application in October of 2021, I also presented written reports from a cardiologist, an ophthalmologist and a designated aviation medical examiner (DAME) who is also an airline pilot. 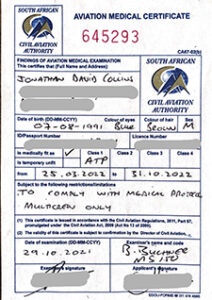 I’m pleased to announce I’m indeed medically fit to fly, and I passed my Airline Transport Pilot License (ATPL) instrument rating renewal on the Boeing 737 aircraft. The restriction on my medical applies to an operational multi-crew limitation – that means there must always be two pilots on the aircraft. Fortunately, this is how we always fly transport category aircraft.

This victory brought on emotions of elation, jubilation and triumph that have been echoing for the last two months.

Thankfully, I was still working for the airline while this process was ongoing, but in a training and administrative capacity.My diabetes has also been well-managed. I thoroughly enjoy the Dexcom Clarity application as I’m able to clearly evaluate what part of my strategy is working and what needs tweaks. I’m consistently in the high nineties for Time-In-Range. Last week, I was fortunate to have a 98% TIR for the week which means the formula is working.