Marriage can be tough at the best of times, but then throw in a chronic disease like diabetes and the road can only get bumpier. We hear the amazing story of Alan and Shirley Goosen and how love, support, patience and understanding in a relationship will always win the day.

Alan (84) and Shirley (81) live in Gerdview, Germiston, JHB. They have two children, seven grandchildren and four great grandchildren, and will be celebrating their 62nd wedding anniversary in June. Alan has been living with Type 2 diabetes for 18 years. 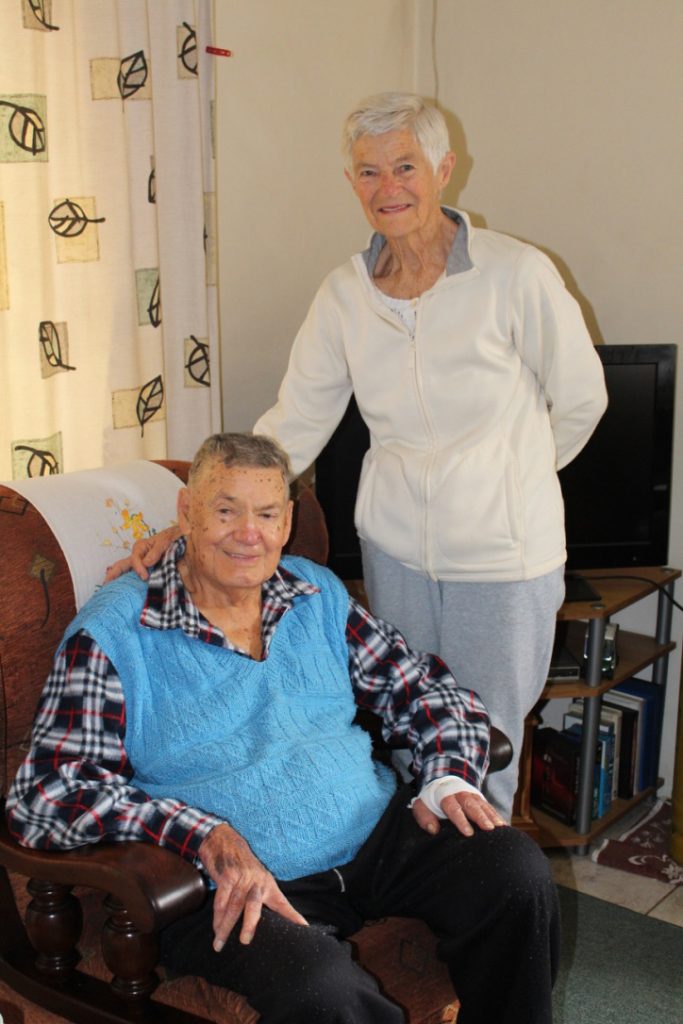 Alan was diagnosed with Type 2 diabetes at the age of 66. He went to his local GP as he had a painful growth on the back of his leg that was making it hard to sit and lie down. The doctor reluctantly cut it out. Through routine tests, it was discovered that Alan had diabetes. His sugar level was sky-high – sitting on 27mmol/L.

Even though Alan was put on numerous medications, he thought the doctor was “talking nonsense”. It was only in early 2000, when he lost part of his sight due to diabetic retinopathy, that he finally accepted and acknowledged his disease. Shirley too admitted that she never thought of his condition as serious until he went partially blind. “At that time, I never knew much about diabetes,” Shirley said.

With Alan losing part of his sight, change was imminent. Shirley had to be the designated driver and do all the tasks that Alan couldn’t. “I just naturally took over,” Shirley said. However, it was Alan who grappled with the adjustment. “When I realised I was now…let’s say disabled, I knew I would be a load on Shirley so I told her to leave me and go because I didn’t want her to carry that load,” Alan said. Shirley was upset by Alan’s response but refused to leave him. Shirley’s reaction, made Alan feel loved and supported. “It made me feel pretty good that she wouldn’t leave me,” Alan said.

Shirley got advice from a sister at the clinic (the medication was too expensive so they asked their doctor to refer them to a clinic), on the types of foods that a Type 2 diabetes patient should avoid (fatty foods, fizzy drinks, sugar) and should eat more of (salads). Shirley added that she then followed the same diet, and that it wasn’t difficult for them to change their way of eating, however, one of Alan’s pet hates is lettuce.

Not being able to see took a toll on Alan; to not be able to drive was a massive blow – with him becoming dependent on Shirley if he wanted to go to the shops. He also had to give up his much-loved hobby gardening as he couldn’t see what he was planting. But in the true Alan-Goosen-fashion, he found a new hobby – woodwork, much to Shirley’s horror. He had collected woodwork machines throughout his younger days so set up a workshop. In the beginning, it was a “painful experience” as when Alan tried to do woodturning, many a times he would land up cutting his face. “I wanted to hit him,” Shirley retorted. Alan responded, “I still have all my fingers!” Soon, Alan learned how to do woodwork through the sensitive touch of his fingers and not with his eyes. If things got too difficult, he would ask Shirley to come assist him. He added that he has done some of his best woodwork during that period. Shirley also underwent emotional suffering. “If we went shopping and he couldn’t feel me or sense me, he would get into a panic…it would just break my heart seeing him like that,” Shirley said.

Nevertheless, the semi-retired couple carried on with their life, doing mission work while living in Breyton, Mpumalanga and gradually adjusted to the changes, persevering through the normal ups and downs that occur in marriage. In 2006, they relocated back to Johannesburg as Alan’s hearing was deteriorating, and they thought it would be best to be closer to their children. However, 18 months after moving back, Alan’s explained that “the Lord restored my hearing.”

Now, every morning after breakfast they go for a walk (Alan uses a walker) – just to the end of their road, weather permitting. “It is not far, but at least we’re trying,” they said. Shirley makes sure Alan takes the correct tablets every day at the right time, arranging them in a weekly pill box and gives them to him to take. She drives them everywhere, cooks all their meals and sometimes must assist him in getting up and walking as he also suffers from diabetic neuropathy (nerve damage caused by high blood sugar resulting in numbness of feet and legs). Alan vulnerably admits, “If it wasn’t for Shirley, I wouldn’t manage. I rely totally on her.”

However, in the same breath, Alan finds Shirley’s constant need to help him do everything exasperating. “My hope is to help myself, whereas she demands to do it for me,” Alan explained, joking “she likes to show who is the boss.” In Shirley’s defence, she does it out of love and concern. “My worry is that he is going to fall so I am inclined to do things for him,” Shirley explained.

Alan has a knack for twisting Shirley’s arm, which she said annoys her. “He’ll say he feels like chocolate when he knows he isn’t allowed it and then I feel bad as he doesn’t enjoy the diabetic chocolates, so I land up giving him some…just a piece, I make sure he doesn’t go overboard!” Shirley said. When they do go out to functions, such as their senior church meetings, Shirley will dish-up food for him, making sure he eats correctly, and in moderation. She always carries hard sweets in her handbag in case Alan has a low.

Alan is still pushing-on and has taken up painting as his new hobby. He also has a tablet that he uses a magnifying glass to see and use. “Call it stubbornness but I will never give up,” he said.

At times, Shirley feels like she is not doing what she should for her husband and is letting him down. “I flare-up and say the wrong thing and upset him, and I don’t like that,” she acknowledged.

Despite all the negative effects diabetes had on Alan and Shirley’s relationship, there is a significant positive. “It made me realise how much I trust my wife and how much I need her not only from a practical point, but also emotionally,” Alan said. 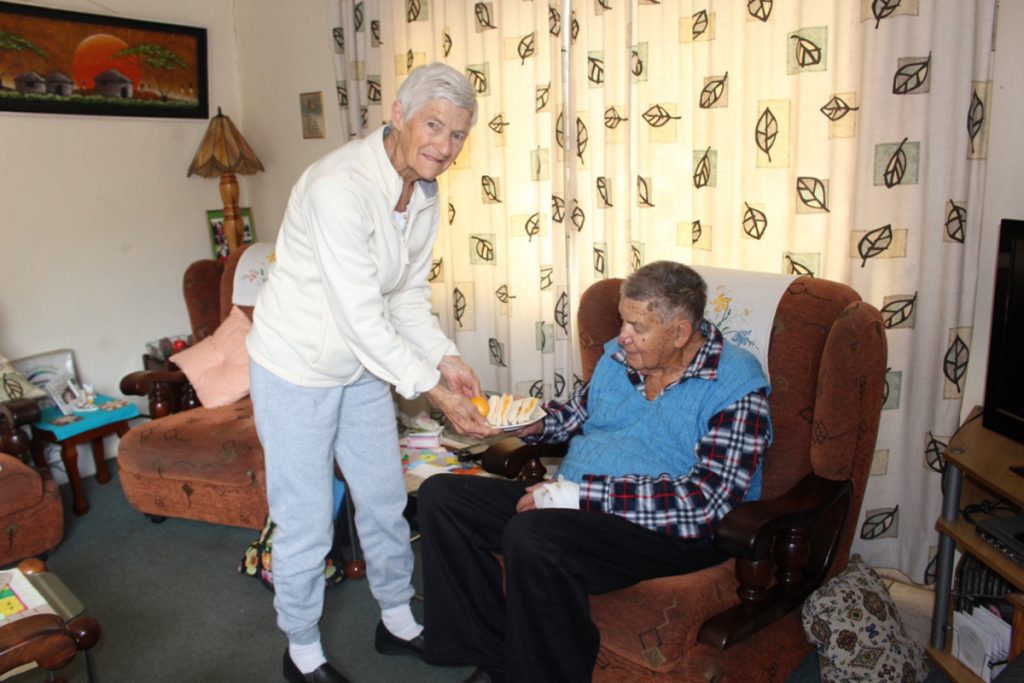 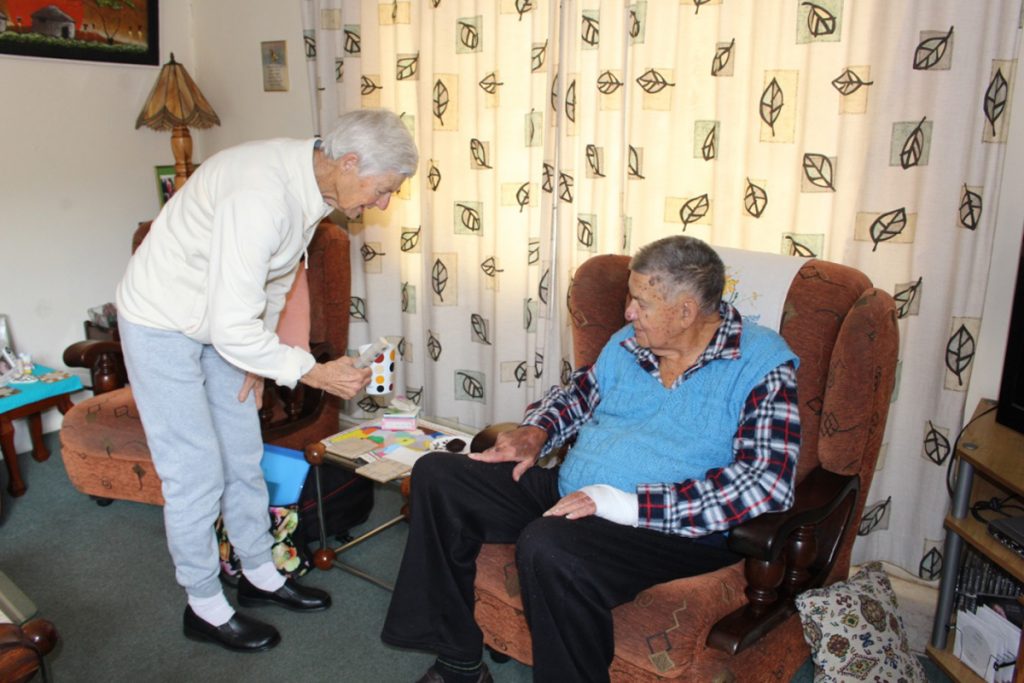 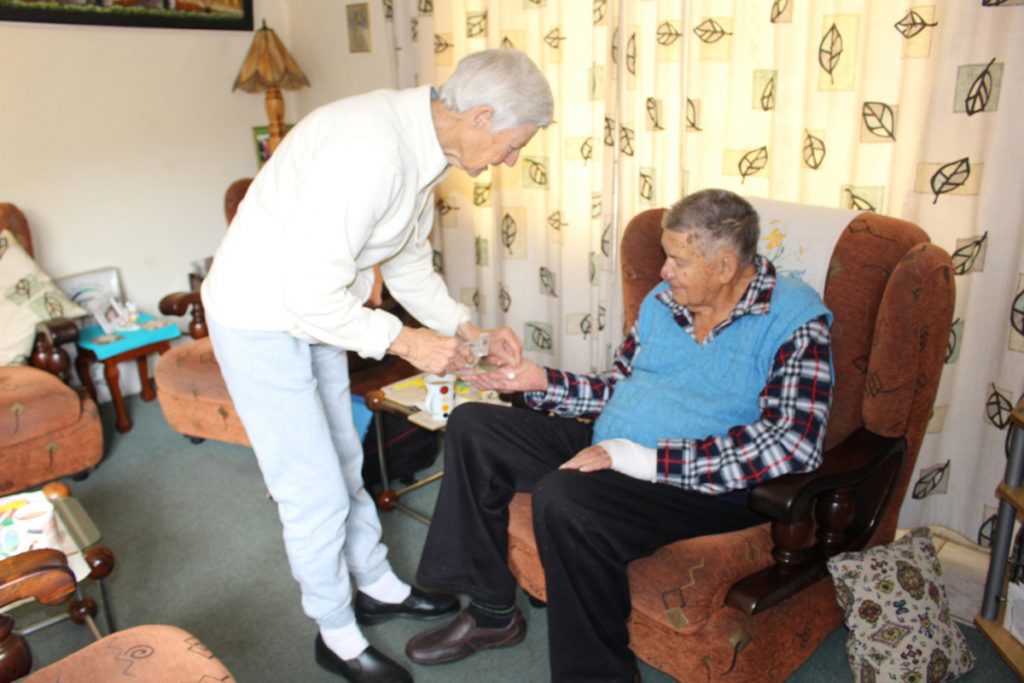 Breakfast (8am): Oats with a banana and yoghurt.

Morning tea (10am): Cup of tea (with Suganon) with a piece of cheese and polony and sometimes a fruit.

Afternoon tea (3pm): A cup full of popcorn or a biscuit.

Dinner (6pm): Fat-free mince/chicken/fish with rice and always vegetables with a cup of coffee.

After dinner: A fruit (whatever is available). 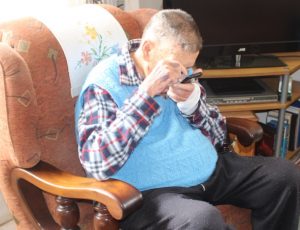 Diabetic Retinopathy develops over long periods with high levels of blood glucose which cause damage to blood vessels in the retina, causing them to clog or leak. In turn, these vessels are unable to deliver an adequate supply of nutrients to light-sensitive cells in the retina, resulting in partial or complete vision loss1.