We hear the extraordinary story of 10-year-old Ethan McLuckie, a Type 1 diabetes patient.

Ethan McLuckie (10) stays in Benoni, Gauteng with his parents, Craig and Rita, and his older brother, Aiden.

When you meet Ethan, you instantly recognise just how intelligent he is. He loves building things, especially from Lego pieces and proudly shows off his latest creation. In fact, he was the youngest person to have taken part in the Lego Expo 2017. His parents call him their little scientist. “He has such unique interests, he loves robots and is always watching documentaries on space. He can tell you about the speed of light and black holes. A few years back, he called himself a cyborg because of his continuous glucose monitoring system,” Rita explains. Not only is he smart but for a 10-year-old boy, he handles his Type 1 diabetes with utmost ease and acceptance.

Ethan was born with a cleft of the soft palate. As a result, he had many ear infections and was put on plentiful cortisone and antibiotics. He had his first grommets at three months and at the age of five months, his palate was repaired. Rita believes the trauma of this could maybe explain why Ethan developed Type 1 diabetes as there are studies that say childhood trauma may increase the risk of Type 1 diabetes.

Then when Ethan was 16 months old, in April 2009, the McLuckie family went on holiday. Ethan had transformed from a puffy marshmallow (from the cortisone) into a skinny baby with no baby fat. At that time, Ethan was still in nappies and the urine seeped through them. Rita assumed the nappies were just a poor-make brand that she had bought, reasoning why she had to change his bed linen three times a night. Ethan also had an insatiable thirst.

Once the family got back from holiday, they went straight to a paediatrician. Luckily, due to Craig having studied medical biochemistry (he had written a paper on diabetes), he immediately linked the symptoms to diabetes. Ethan was listless and had dark rings under his eyes. By this time, they could smell the ketones in his breath (a fruity acetone smell).

Then at age 4, Ethan was diagnosed with epilepsy. Rita says epilepsy is quite common in children with Type 1 diabetes. It took a while for doctors to get to the diagnosis as at first they suspected Ethan had a heart problem. Fortunately, for the past two years Ethan hasn’t had a seizure and he continues taking his medication – Epilim. Interestingly, when Ethan had fits, his sugars levels were always normal.

Hope from a friend

A family friend, who also has Type 1 diabetes, gave Craig and Rita hope. He showed them that life can be lived to the fullest with diabetes. He was diagnosed as a kid and is still doing well. The friend also proved the warning of not using the same spot to inject insulin true, as he had fatty deposits on the side he favoured (as it wasn’t that painful) to inject.

When Ethan was diagnosed, his treatment regime was long-acting insulin (Lantus) during the day and at night he was on fast-acting insulin (Humalog), and Humulin N insulin. An injection was used, which was quite traumatic for him, as an insulin pen couldn’t administer such small doses (less than half a unit). Even using an injection proved arduous to get the exact dose that was needed.

However, after a few years of using an injection, Ethan experienced numerous lows and the paediatric endocrinologist suggested he use the insulin pump. Ethan was six years old when he started using a Medtronic MiniMed insulin pump. 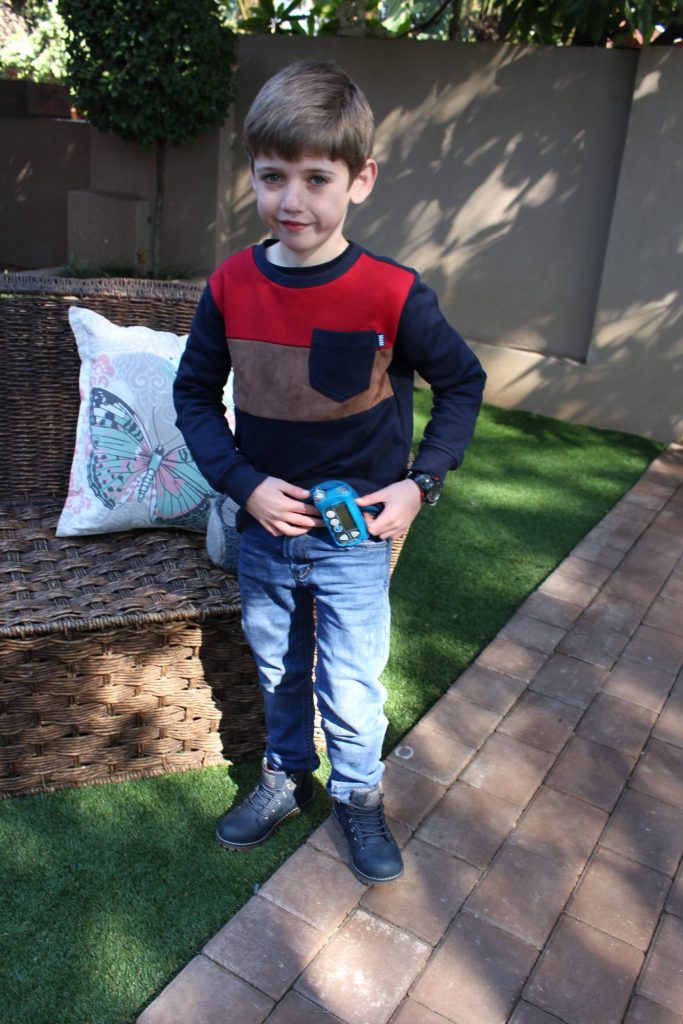 Changing to a pump

The pump was welcomed by his nursery school teachers as they were quite nervous injecting him. Nonetheless, all the teachers were willing to assist. Though, once when Ethan was having hyperglycaemia, one teacher panicked and rummaged through his bag and instead of using the insulin, she injected him with Glucagon. Craig noticed this when he picked Ethan up and corrected it. “We can look back at it now and see it as an anecdote but back then it was scary,” Craig says.

For the first two years of using the pump, Ethan’s teachers would help him with it. A book was kept where they recorded what he ate and monitored his sugar levels. But now, Ethan manages the pump himself. The added-bonus is that his current teacher is also a Type 1 diabetic. Rita says, “The great thing with her is that she doesn’t baby him but rather encourages him to do it himself.”

About two years ago, Ethan was put on the Dexcom continous glucose monitoring system.  The Dexcom has given Craig and Rita better sleep at night. “If he has a high or a low, it sounds an alarm so we are not having interrupted sleep like we used to when we had to check his levels,” Craig says. Rita adds, “We still check the monitor readings every two hours, but it is just opening one eye and then seeing white lines and saying ‘Yay!’ and going back to sleep.”

Ethan is not a good eater so Rita packs him a variety of food items to choose from. She then writes all the grams of carbohydrates of the items on a Post-it and leaves it in his lunch box. Then once he chooses the items he wants to eat, he adds the carbs together and adjusts the pump dose accordingly. “It helps with his maths too,” Rita says.

Craig explains that Ethan is at the stage now where he can recognise if he is having a hypo or hyper and alerts them. They have also found an advantage to Ethan having diabetes – they can pick up when Ethan is coming down with something, like a cold or the flu. “Literally, 24 hours before he starts to show the symptoms, his blood sugar levels will go up and we can’t get them down. Then we start giving double-doses of insulin, taking up the basal rates up to 150%+. So, the advantage is that you can almost pre-empt when the body is going under extra stress,” Craig says.

Then also because Ethan is not a good eater, and has low muscle tone so he doesn’t like to chew a lot, they find that his sugar levels are low as he doesn’t always eat dinner. “We will open the fridge and low and behold there is his full dinner plate,” Rita says. “Then during the night, his sugar will go low…try feeding a sleeping child! We normally give him milk with a bit of sugar in it, as the fat in the milk rises the sugar levels slowly.”

Luckily Ethan loves nuts, biltong sticks and yoghurt. Rita gives him the full cream yoghurt as it absorbs slower. She admits breakfast is tricky as Ethan eats slowly; they solved this by giving him smoothies to drink. But now, Ethan seems to like French toast.

The family did try the whole carb-free diet. However, Aiden, their  teenage son has a huge appetite. So, this had to change.

On average, Ethan has insulin four to six times a day at mealtimes. Though on weekends, it can differ due to not being in his normal routine.

Craig and Rita have also discovered that Ethan’s body reacts differently to insulin at different times of the day. In the morning, from time to time, Ethan’s body isn’t that sensitive to insulin so they will have to inject him almost 45 minutes before he eats, where the normal time is about 10 to 15 minutes.

“If we inject the usual time, then he has a spike at school and they try to correct it, then he has a drop. It is a nightmare! These are the things that no one teaches you and you must learn for yourself. And just when you think you are on top of it and you have worked it all out, sugar levels go crazy, or he has a growth spurt or the sniffles, or his port gets blocked,” Craig and Rita say.

“In the afternoon, every so often, Ethan’s sugar levels can go a bit low. It is partly due to him being active as he is at aftercare and running around. His sensitivity to insulin also increases so less insulin can give the same result.” 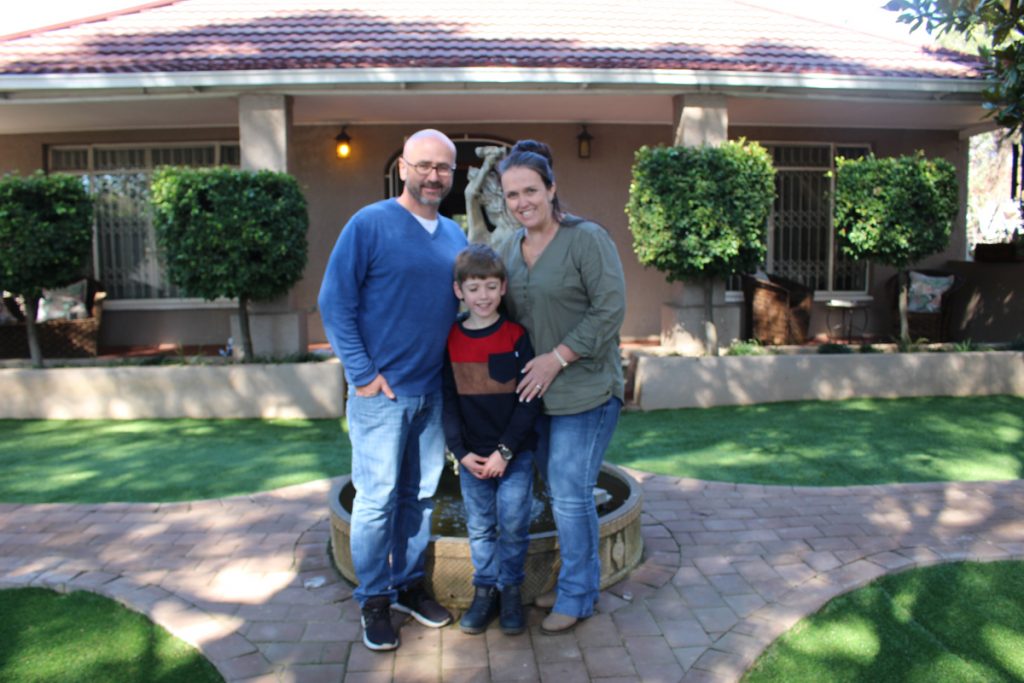 To date, Ethan has never slept out, not even at his grandparents. Next year will be the first year that Ethan will go on a school camp. Rita is besides herself as she doesn’t know if he can go unless the school allows her to go with. Plus, she is worried that he will be upset if he can’t go. But her biggest concern is she doesn’t want him to miss out. “At the end of the day, he is just a normal little boy,” she says.

“If he is invited to children’s’ parties, you can’t expect parents to put out broccoli or carrot sticks. It’s hard. Recently, a child celebrated his birthday and the parents bought the whole class McDonalds. But we are proud to say Ethan came home with it, he had two tiny small bites and then his brother got hold of it,” Craig says.

Though once Ethan is a bit older, they would like to send him on camps for children with diabetes. 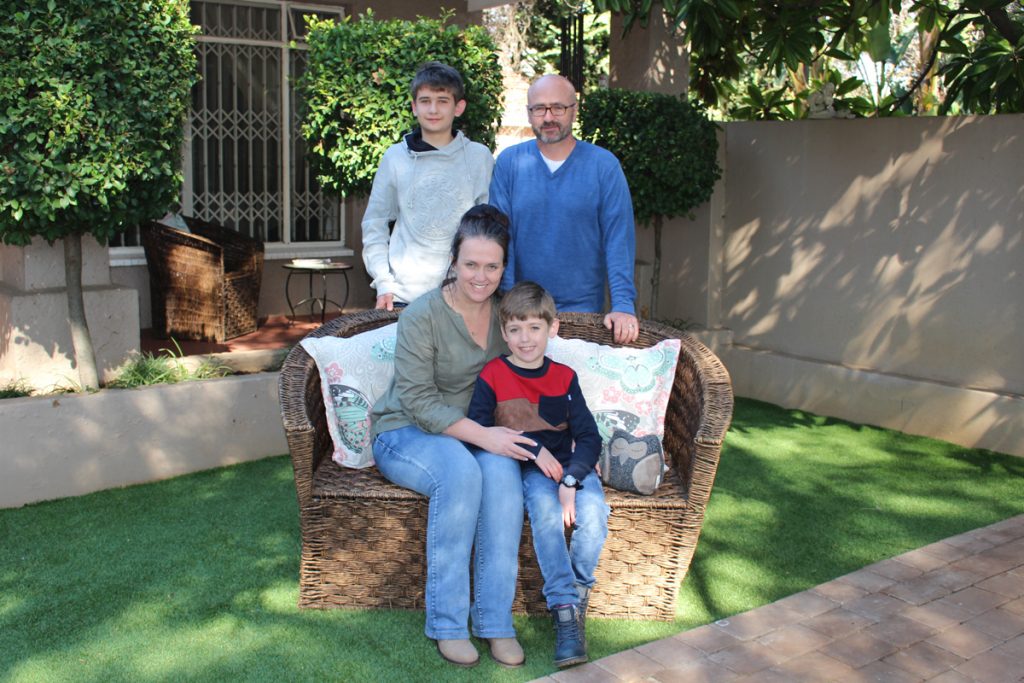 Hard on the family

Due to Ethan being diagnosed so young, he never knew what sweets were. With that said, Rita knows it was harder for her older son as he was told, “No, you can’t have that or else your brother will also want it.”

She also says that it is hard for family members, especially Ethan’s grandparents, as they just want to spoil him with treats. “There is the thinking that if you have a pump, you can still eat whatever you want, but it isn’t like that,” Craig says. “For example, peanuts or sugar-free sweets. These might be safe but all in small amounts. To much sugar-free sweets can lead to diarrhoea due to the aspartame in them.”

When asked what he dislikes and likes about his diabetes, the 10-year-old responds, “I like that is it easy to control but what I don’t like is getting ports.”

The ports for the pump need to be changed every three to four days. Ethan doesn’t like the ports on his tummy, so it is put on his buttocks. The sensor for the Dexcom is inserted on Ethan’s arm and Rita does this when he is sleeping.

“Last year, for two months, Ethan asked for the injection. He was just fed up with the port and pump. We also like to give him a break from the pump, especially if we are at the beach,” Rita explains.

Ethan is very small for his age and Rita says because of this and the fact that his teachers initially had to give him extra time nd attention to test his sugar levels and inject him, the other children might have resented him a little. As small as Ethan is, he gives as good as he gets and is a tough kid. We concur especially due to the way he has faced all his health challenges.