Sekedi Candy Mokwena (48), better known as Candy Tsamandebele, lives in Kempton Park. She is a mother of two sons and is a grandmother to a beautiful eight-year-old girl, Sehlora.

Shortly after Candy’s first-born son, Phetole, passed away, in 2011, in a car accident and due to the trauma and stress of his passing, Candy was diagnosed with Type 2 diabetes. At the time, she didn’t know what the symptoms of diabetes were but rather just knew of the disease itself. She was prescribed diaglucide, gliclazide, and metformin.

Since being diagnosed Candy has changed her lifestyle. “I had to have a fulfilling life. I eat healthily and exercise a lot – off and on stage. My mother has made it her mission to remind me all the time to eat healthy food, like morogo (African spinach). We grew up eating this. When my youngest son cooks, he prepares food that he knows is healthy. In fact, the entire family has adopted my way of eating,” she says. 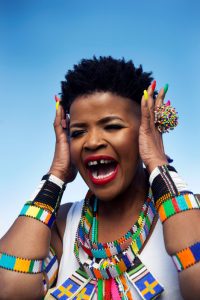 When asked how she manages her career and diabetes, she responds, “It takes some doing. However, I have employed some good mechanisms to help me. The people I work with know of my situation. They have made it their business to make sure I eat on time and take my meds when on the road. I have a personal support group, and have numerous reminders in the house to notify me of my doctor’s appointment amongst other things.

Candy believes that South Africans are not aware of the dangers of diabetes. “Not like they know the dangers of diseases like HIV/AIDS. They fear HIV/AIDS far more than diabetes as they believe it more deadly and life-threatening. This is caused by the general information and awareness as far as these diseases are concerned. Diabetes has generally not received as much attention, and information around it has not yet reached the person on the ground fully. People only hear or care about it when its directly or indirectly affecting them.