Dr Angela Murphy shares informative insight on Type 1 diabetes, how it is managed and what the future holds.

What’s in a name?

The word diabetes originates from Greek, meaning increased or excess urination, a symptom common in the initial presentation of diabetes. However, an imbalance of hormones controlling water balance can also cause increased urination, but the quality of the urine is very different. Hence the terms mellitus, meaning sweet, and insipid which means clear. Diabetes mellitus describes the group of conditions where blood glucose is too high. Diabetes insipidus is an abnormality of water balance, either in the kidney or from the hormones in the pituitary.

What’s in a type?

Diabetes seemed to present in two different ways: more slowly and in older patients or very suddenly in younger patients. Some patients required insulin to survive, others could be managed with dietary changes and later, when they became available, oral medications.

Classification of diabetes has changed over the years and continues to be debated as there is likely an overlap of the different types. The current classification is based on the cause of the diabetes, not patient age or whether insulin is used.

Type 1 diabetes – autoimmune diabetes which will be discussed further.

Type 2 diabetes – insulin resistance (usually due to excess body fat) and decreasing insulin secretion from the pancreas cause high blood glucose levels. This is the most common type of diabetes accounting for more than 90% of cases.

Diabetes due to other causes – this includes monogenic diabetes, such as Mature Onset Diabetes of the Young (MODY); diseases of the pancreas, such as pancreatitis and drug-induced diabetes.

Type 1 diabetes is a genetic, sometimes hereditary, autoimmune disorder present from birth. Our immune systems should activate to attack external dangers such as infections and allergens which could cause harm.

In autoimmune disease, the immune system is activated by an external trigger but then proceeds to attack the body’s own cells. In Type 1 diabetes, the target is the insulin secreting beta-cells which lies in the islets of the pancreas. There may be more than one attack on the pancreas before evidence of diabetes is seen. Insulin secretion is usually at 50% of normal before blood glucose rises significantly causing symptoms.

How does Type 1 diabetes feel?

Glucose is the primary fuel for the body and required for all cellular function. Almost all food is ultimately digested to glucose which is then transported around the body in the blood vessels. For glucose to enter each cell, insulin needs to unlock the cell door. If insulin is absent, as in Type 1 diabetes, the glucose gets trapped in the blood vessels. This causes:

Blood glucose is now trapped in the blood vessels causing hyperglycaemia (high blood glucose). When this blood is filtered in the kidneys, excess glucose spills into the urine drawing fluid with it.   This is what causes the excess urination as well as the ‘sweet’ urine. The glucose in the urine can be a breeding ground for bacteria and a urinary infection can further worsen the symptoms. This excess loss of fluid stimulates the thirst centre and so the person will develop another common symptom: incredible thirst and increased consumption of fluids.

While the high glucose is causing problems by remaining in the blood stream, the lack of glucose entering the cells leaves them starving.  The cells must look for other sources of nutrition for energy production. Protein and fat stores are broken down to provide this source and as these are used up the person with Type 1 diabetes starts to lose weight, another common presenting symptom.

The energy produced may not be as great and so tiredness and fatigue become a complaint as well. As more fat is broken down, it creates a by-product – ketones. Ketones are acids which alter the pH of the body as they accumulate and can cause the dangerous condition of diabetic ketoacidosis (DKA). Sadly, an all-too-common presenting feature of Type 1 diabetes. The only way to rid the body of ketones is to give insulin which will then move glucose into the cells and switch off the use of fat as a source of energy.

The Epidemiology of Diabetes Interventions and Complications (EDIC) trial followed the DCCT patients for up for a further 12 years and saw that the original intensively controlled group of patients continued to have a significant reduction in complication rates compared to those who had standard control. This proved the concept of ‘metabolic memory’ which means good control from diagnosis is vital for long-term protection.

How is Type 1 diabetes diagnosed?

The diagnosis of diabetes is the same for all types and accepted internationally as follows: if  fasting blood glucose level is ≥ 7,0mmol/L, or a two-hour post glucose challenge is ≥ 11,1mmol/L, or a HbA1c value is >6,5%.

In most instances, people presenting with Type 1 diabetes will have symptoms as described above so one test will confirm the diagnosis.  If there are no symptoms, a second confirmatory test has to be done.

How is Type 1 diabetes treated?

This is truly a one-word answer: insulin. This year we celebrate 100 years since the discovery of insulin and the fact that people diagnosed with Type 1 diabetes can live a long life. I have had several patients in my practice who have had Type 1 diabetes for more than 40 years and one remarkable lady for more than 60 years.

A healthy, balanced diet is important for people living with Type 1 diabetes and will contribute to overall better diabetes control.  However, the most important aspect of treatment is to ensure that there is enough insulin, at the right time, to move glucose from the blood stream into the cells. 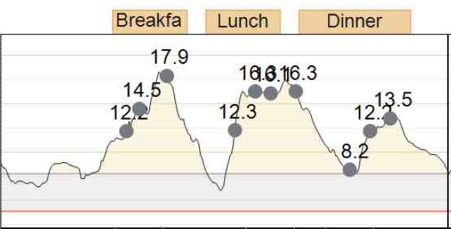 How is Type 1 diabetes monitored?

Trying to manage Type 1 diabetes without regular measuring of blood glucose levels is like trying to drive a car with a blindfold on.  There are excellent glucometers available which allows accurate testing with results in seconds.

The advent of continuous glucose monitoring devices has truly improved the burden of glucose testing.  Not only does it mean less, or no finger pricks, but so much more information can be seen on the continuous sensor. Everyone living with Type 1 diabetes knows that no two days are alike. Being able to ‘see’ the glucose and take immediate action gives much better overall control.

It is still valuable to look at averages, patterns and, of course, HbA1c (three-monthly test). Most people with Type 1 diabetes should be aiming for a HbA1c of <6,5%. Guidelines tell us that this means keeping fasting blood glucose between 4 mmol/L and 7 mmol/L and the two-hour mealtime glucose should be less than 8mmol/L.

For those people fortunate enough to use a continuous glucose sensor, we look at a new parameter called Time in Range. This measures all readings from 4mmol/L to 10 mmol/L.  A Time in Range above 70% is considered good control.

Can Type 1 diabetes be cured?

Although many advances have been made to manage Type 1 diabetes, we cannot claim yet to have a cure. Research has focused on a biological cure, but it is technology that is making the greatest strides.

The age of the ‘artificial pancreas’ is here in the form of insulin pumps that respond to glucose readings from continuous glucose monitoring systems. The most sophisticated of these have almost closed the loop in diabetes control with only the calculation of carbohydrate content of a meal and the timing of food boluses still needing to be done by the person with diabetes. There is no doubt that these systems help achieve better and consistent glucose levels.  Unfortunately, they are expensive and not available to most people living with diabetes.

This means that instead of just supplying the body with insulin, a biological cure would need to supply the body with the functioning islet cells needed to make insulin. However, these islets need to be protected from being attacked by the same autoimmune process that caused the diabetes in the first place. The race is on to create the ideal barrier to protect the transplanted islet cells. There is, in addition, a need to produce large volumes of islet cells that does not rely solely on organ donation. And there is debate about the ideal site to introduce the new islets cells to, ranging from the liver to subcutaneous fat.

Much to be grateful for

I’m grateful that insulin was discovered 100 years ago and has allowed people to continue living with Type 1 diabetes. I’m grateful that there is still so much dedication and research in this field. And I’m hopeful that a cure will be found. In the meantime, managing blood glucose levels with a healthy lifestyle and access to insulin and glucose measuring should be something all people with Type 1 diabetes have the chance to do.

Dr Angela Murphy is a specialist physician working in the field of Diabetes and Endocrinology in Boksburg. She runs a busy diabetes practice incorporating the CDE Programme, Discovery Diabetes Care Programme and an accredited insulin pump centre.